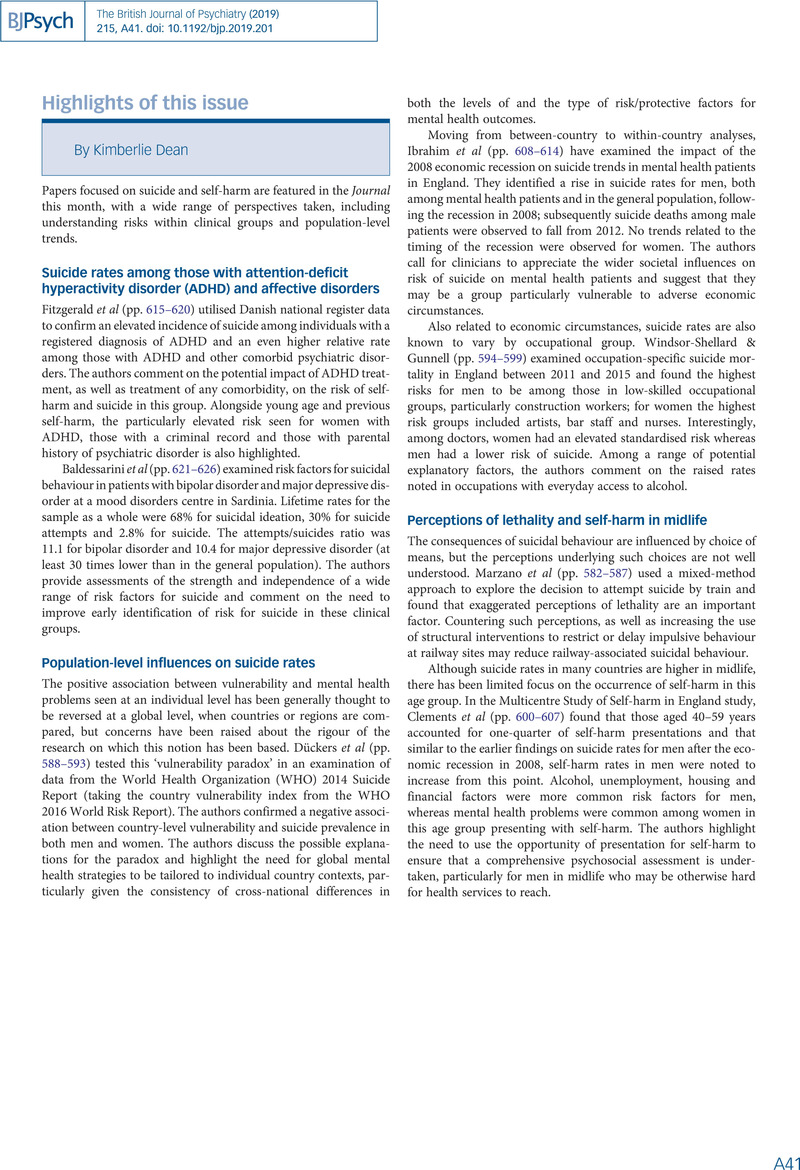 An abstract is not available for this content so a preview has been provided. To view the full text please use the links above to select your preferred format.
Type
Highlights of this issue
Information
The British Journal of Psychiatry , Volume 215 , Issue 4 , October 2019 , pp. A41
DOI: https://doi.org/10.1192/bjp.2019.201[Opens in a new window]
Copyright
Copyright © The Royal College of Psychiatrists 2019

Papers focused on suicide and self-harm are featured in the Journal this month, with a wide range of perspectives taken, including understanding risks within clinical groups and population-level trends.

Fitzgerald et al (pp. 615–620) utilised Danish national register data to confirm an elevated incidence of suicide among individuals with a registered diagnosis of ADHD and an even higher relative rate among those with ADHD and other comorbid psychiatric disorders. The authors comment on the potential impact of ADHD treatment, as well as treatment of any comorbidity, on the risk of self-harm and suicide in this group. Alongside young age and previous self-harm, the particularly elevated risk seen for women with ADHD, those with a criminal record and those with parental history of psychiatric disorder is also highlighted.

Baldessarini et al (pp. 621–626) examined risk factors for suicidal behaviour in patients with bipolar disorder and major depressive disorder at a mood disorders centre in Sardinia. Lifetime rates for the sample as a whole were 68% for suicidal ideation, 30% for suicide attempts and 2.8% for suicide. The attempts/suicides ratio was 11.1 for bipolar disorder and 10.4 for major depressive disorder (at least 30 times lower than in the general population). The authors provide assessments of the strength and independence of a wide range of risk factors for suicide and comment on the need to improve early identification of risk for suicide in these clinical groups.

The positive association between vulnerability and mental health problems seen at an individual level has been generally thought to be reversed at a global level, when countries or regions are compared, but concerns have been raised about the rigour of the research on which this notion has been based. Dückers et al (pp. 588–593) tested this ‘vulnerability paradox’ in an examination of data from the World Health Organization (WHO) 2014 Suicide Report (taking the country vulnerability index from the WHO 2016 World Risk Report). The authors confirmed a negative association between country-level vulnerability and suicide prevalence in both men and women. The authors discuss the possible explanations for the paradox and highlight the need for global mental health strategies to be tailored to individual country contexts, particularly given the consistency of cross-national differences in both the levels of and the type of risk/protective factors for mental health outcomes.

Moving from between-country to within-country analyses, Ibrahim et al (pp. 608–614) have examined the impact of the 2008 economic recession on suicide trends in mental health patients in England. They identified a rise in suicide rates for men, both among mental health patients and in the general population, following the recession in 2008; subsequently suicide deaths among male patients were observed to fall from 2012. No trends related to the timing of the recession were observed for women. The authors call for clinicians to appreciate the wider societal influences on risk of suicide on mental health patients and suggest that they may be a group particularly vulnerable to adverse economic circumstances.

Also related to economic circumstances, suicide rates are also known to vary by occupational group. Windsor-Shellard & Gunnell (pp. 594–599) examined occupation-specific suicide mortality in England between 2011 and 2015 and found the highest risks for men to be among those in low-skilled occupational groups, particularly construction workers; for women the highest risk groups included artists, bar staff and nurses. Interestingly, among doctors, women had an elevated standardised risk whereas men had a lower risk of suicide. Among a range of potential explanatory factors, the authors comment on the raised rates noted in occupations with everyday access to alcohol.

Perceptions of lethality and self-harm in midlife

The consequences of suicidal behaviour are influenced by choice of means, but the perceptions underlying such choices are not well understood. Marzano et al (pp. 582–587) used a mixed-method approach to explore the decision to attempt suicide by train and found that exaggerated perceptions of lethality are an important factor. Countering such perceptions, as well as increasing the use of structural interventions to restrict or delay impulsive behaviour at railway sites may reduce railway-associated suicidal behaviour.

Although suicide rates in many countries are higher in midlife, there has been limited focus on the occurrence of self-harm in this age group. In the Multicentre Study of Self-harm in England study, Clements et al (pp. 600–607) found that those aged 40–59 years accounted for one-quarter of self-harm presentations and that similar to the earlier findings on suicide rates for men after the economic recession in 2008, self-harm rates in men were noted to increase from this point. Alcohol, unemployment, housing and financial factors were more common risk factors for men, whereas mental health problems were common among women in this age group presenting with self-harm. The authors highlight the need to use the opportunity of presentation for self-harm to ensure that a comprehensive psychosocial assessment is undertaken, particularly for men in midlife who may be otherwise hard for health services to reach.

Highlights of this issue
×

Highlights of this issue
×

Highlights of this issue
×
×