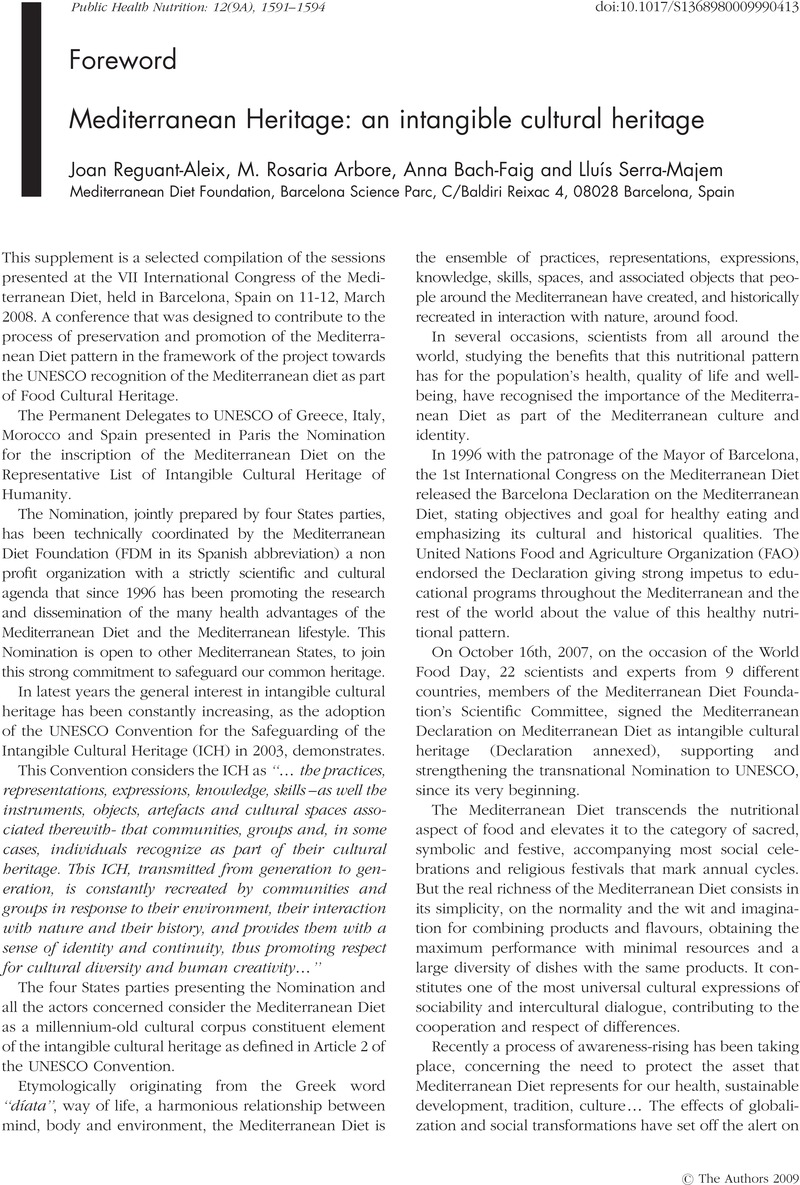 The Permanent Delegates to UNESCO of Greece, Italy, Morocco and Spain presented in Paris the Nomination for the inscription of the Mediterranean Diet on the Representative List of Intangible Cultural Heritage of Humanity.

In latest years the general interest in intangible cultural heritage has been constantly increasing, as the adoption of the UNESCO Convention for the Safeguarding of the Intangible Cultural Heritage (ICH) in 2003, demonstrates.

This Convention considers the ICH as “… the practices, representations, expressions, knowledge, skills –as well the instruments, objects, artefacts and cultural spaces associated therewith- that communities, groups and, in some cases, individuals recognize as part of their cultural heritage. This ICH, transmitted from generation to generation, is constantly recreated by communities and groups in response to their environment, their interaction with nature and their history, and provides them with a sense of identity and continuity, thus promoting respect for cultural diversity and human creativity…”

The four States parties presenting the Nomination and all the actors concerned consider the Mediterranean Diet as a millennium-old cultural corpus constituent element of the intangible cultural heritage as defined in Article 2 of the UNESCO Convention.

Etymologically originating from the Greek word “díata”, way of life, a harmonious relationship between mind, body and environment, the Mediterranean Diet is the ensemble of practices, representations, expressions, knowledge, skills, spaces, and associated objects that people around the Mediterranean have created, and historically recreated in interaction with nature, around food.

In several occasions, scientists from all around the world, studying the benefits that this nutritional pattern has for the population’s health, quality of life and well-being, have recognised the importance of the Mediterranean Diet as part of the Mediterranean culture and identity.

The Mediterranean Diet transcends the nutritional aspect of food and elevates it to the category of sacred, symbolic and festive, accompanying most social celebrations and religious festivals that mark annual cycles. But the real richness of the Mediterranean Diet consists in its simplicity, on the normality and the wit and imagination for combining products and flavours, obtaining the maximum performance with minimal resources and a large diversity of dishes with the same products. It constitutes one of the most universal cultural expressions of sociability and intercultural dialogue, contributing to the cooperation and respect of differences.

Recently a process of awareness-rising has been taking place, concerning the need to protect the asset that Mediterranean Diet represents for our health, sustainable development, tradition, culture… The effects of globalization and social transformations have set off the alert on the dangers that it can suffer. In this frame, its inscription as ICH will represent an important counterpoint to the processes of erosion threatening it. Its inscription will contribute to give visibility to all its associated cultural, social and symbolic content, granting them greater opportunities to express it, an it will stimulate institutional safeguarding efforts, which will lead to an increased presence and visibility of this heritage in normative texts, and protective measures and an increased legal recognition.

Since the beginning of this project, the territories, localities, associations, foundations, institutes and research centres, as well as local, regional and national governments have collaborated in the preparation of the nomination as well as in the study and implementation of documentation, dissemination and protection initiatives.

Awareness campaigns and programmes aimed at safeguarding the Mediterranean Diet have been developed: legal, technical, administrative and financial measures will be adopted; as well as scientific forums, conferences, roundtables, and other events. Scientific, technical and cultural studies will be strongly fostered. The research centres and universities will be invited to involve young researchers within this field, to start investigations and inventories. Local institutions, museums, documentation centres and cultural associations are being activated to carry out initiatives for the preparation of inventories of the element. In order to develop awareness of the Mediterranean Diet in society, educational programmes particularly addressed to young people are being studied.

In Spain, the Mediterranean Diet Foundation, in collaboration with the Ministry of Culture, the Ministry of the Environment and Rural and Marine Affairs, several local authorities and civil society representatives, has been organising many public actions to promote the awareness rising and the participation of the populations in the protection of their culture and traditions, and created a Web page where people can endorse the Nomination and express their support to the Mediterranean Diet as an Intangible Cultural Heritage of Humanity.

The success of these initiatives confirms once again the commitment of the populations to the Mediterranean culture and the importance of dissemination activities for the promotion and protection of the Mediterranean Diet, our intangible heritage, our way of life.

2007 BARCELONA DECLARATION ON THE MEDITERRANEAN DIET AS INTANGIBLE CULTURAL HERITAGE

The Mediterranean Diet Foundation’s Scientific Committee, in its meeting, held in Barcelona, on October 16th, 2007, on the occasion of the World Food Day,

Reaffirming the 1996 Barcelona Declaration on the Mediterranean Diet that expresses both the consensus of the international scientific community on the health benefits of this diet, as well as the need to preserve its historical and cultural qualities for future generations,

Assuming its role as an independent and expert consulting body, for all those matters that require a scientific opinion, and reaffirming its intention to investigate and disseminate the values of the Mediterranean Diet and support all initiatives that contribute to its safeguarding and promotion,

Taking into account all the worldwide scientific contributions dedicated to the knowledge of the Mediterranean Diet, and reaffirming its importance for the health promotion of the population and its preventive properties against cardiovascular diseases, some types of cancer and other non communicable diseases,

Acknowledging that the traditional Mediterranean Diet has been recognized as a healthy and nutritionally balanced diet, based on a broad variety of locally produced and palatable foods,

Considering the Mediterranean Diet’s contribution to intercultural dialogue, to the transfer of knowledge and technology and to the social and economic revitalization of Mediterranean communities,

Recognizing the role of the family, school, and the community in transmitting cultural values and practices surrounding food,

Recognizing that the Mediterranean Diet is an extraordinary cultural heritage, that is expressed in a diversity of food traditions, landscapes, culinary creativity, gatherings and celebrations,

The Scientific Committee, on the occasion of the World Food Day 2007, issues the following

The present declaration arises from the debates and common analysis of the scientists and experts of the Scientific Committee of the Mediterranean Diet Foundation; whose names are cited in the following list:

University of the Balearic Islands, Spain

Board of Health, Norway