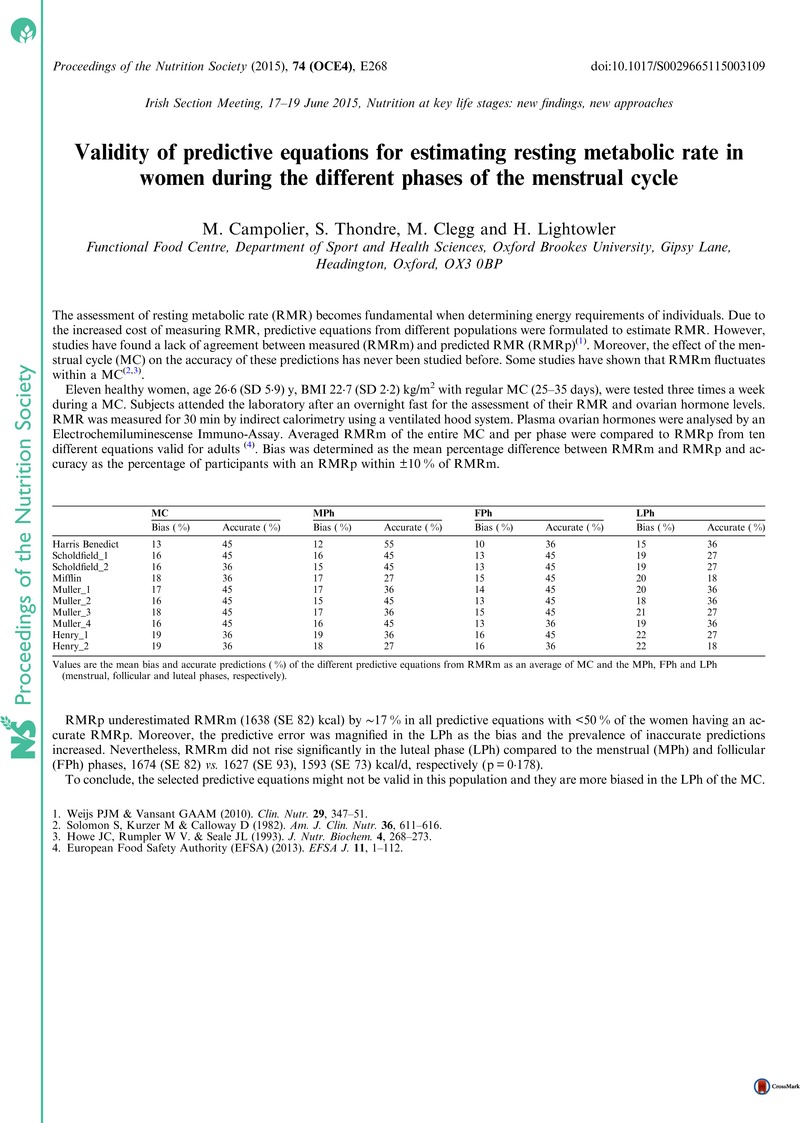 An abstract is not available for this content so a preview has been provided. To view the full text please use the links above to select your preferred format.
Type
Abstract
Information
Proceedings of the Nutrition Society , Volume 74 , Issue OCE4: Irish Section Meeting, 17–19 June 2015, Nutrition at key life stages: new findings, new approaches , 2015 , E268
DOI: https://doi.org/10.1017/S0029665115003109[Opens in a new window]
Copyright
Copyright © The Authors 2015

The assessment of resting metabolic rate (RMR) becomes fundamental when determining energy requirements of individuals. Due to the increased cost of measuring RMR, predictive equations from different populations were formulated to estimate RMR. However, studies have found a lack of agreement between measured (RMRm) and predicted RMR (RMRp)( Reference Weijs and Vansant 1 ). Moreover, the effect of the menstrual cycle (MC) on the accuracy of these predictions has never been studied before. Some studies have shown that RMRm fluctuates within a MC( Reference Solomon, Kurzer and Calloway 2 , Reference Howe, Rumpler and Seale 3 ).

Eleven healthy women, age 26·6 (SD 5·9) y, BMI 22·7 (SD 2·2) kg/m2 with regular MC (25–35 days), were tested three times a week during a MC. Subjects attended the laboratory after an overnight fast for the assessment of their RMR and ovarian hormone levels. RMR was measured for 30 min by indirect calorimetry using a ventilated hood system. Plasma ovarian hormones were analysed by an Electrochemiluminescense Immuno-Assay. Averaged RMRm of the entire MC and per phase were compared to RMRp from ten different equations valid for adults ( 4 ). Bias was determined as the mean percentage difference between RMRm and RMRp and accuracy as the percentage of participants with an RMRp within ±10 % of RMRm.

Values are the mean bias and accurate predictions ( %) of the different predictive equations from RMRm as an average of MC and the MPh, FPh and LPh (menstrual, follicular and luteal phases, respectively).

To conclude, the selected predictive equations might not be valid in this population and they are more biased in the LPh of the MC.