In the ruminants, the development of the gastrointestinal tract is more complex than that of monogastrics due to the need to establish a fully functional and differentiated rumen, in which a diverse microbial population of bacteria, fungi and protozoa support fermentation and digestion of dietary fibre. The microbial colonisation occurs in the rumen after birth, which causes extensive immune adaptation in the host(Reference Cebra1).

The aim of this work was to study, based on previous observations(Reference Yáñez-Ruiz, Hart and Martín-García2), whether interventions in early life of goats have an impact on the rumen microbial ecosystem later in life and to what extent this fact is linked to the host immune system.

Two experimental groups of treated (M+) and non-treated (M−) lactating goats (n 9 per group) were used to analyse the effect of adding bromochloromethane (BCM) as antimethanogenic additive in the diet. For each goat, the offspring was also divided into treated (K+) and non-treated (K−) kids, resulting in four experimental groups: M+K+, M+K−, M−K+ and M−K−. Kids' weights were registered weekly (Fig. 1) and methane emissions from kids were recorded twice, 1 month after weaning with all kids separated by treatment (P1) and 2 months later when the kids were all grouped together and the BCM treatment had stopped (P2). To assess the effect on the early development of the immune system total IgA was measured in saliva by ELISA.

These preliminary results suggest that interventions at early life of the animals cause differential microbial rumen colonisation which results in differential rumen activity. This response seems to be influenced by the mother and remains programmed in the animal's adult life, which would need to be linked to the animals' immune response. 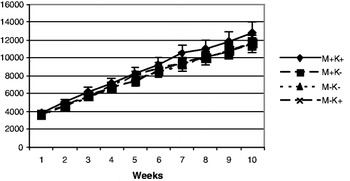 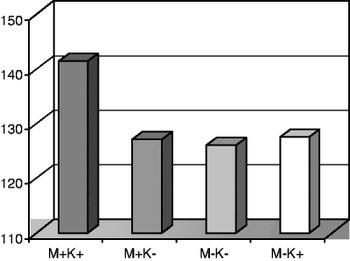