The composition and metabolic activity of the gut microbiota appears to be influenced by adiposity. Accordingly, there is growing interest in nutritional modulation of the gut microbiota and its implications for obesity and type 2 diabetes( 1 ). NUTRIOSE® soluble fibre is selectively fermented in the large human gut and has been shown to have a beneficial impact on insulin resistance( 2 ), appetite regulation( 3 ) and weight management( 4 ). In the present study we sought to investigate the effects of NUTRIOSE® on gut microbial ecology using an in vitro three-stage continuous culture human colonic model system.

Three colonic models, each comprised of 3 vessels (V1, proximal colon; V2, transverse colon; V3, distal colon), were inoculated and run until equilibrium of the system was reached (steady-state 1 (SS1)); this was achieved after 17 days. Thereafter 7 g NUTRIOSE® was administered twice daily at 10.00 am and 3.00 pm, to mimic human ingestion until steady-state 2 (SS2) was reached after a further 18 days. Samples were collected during SS1 and SS2. The microbial composition and short-chain fatty acid (SCFA) concentrations were analysed using 16S rRNA-based fluorescence in situ hybridization and gas chromatography approaches, respectively. 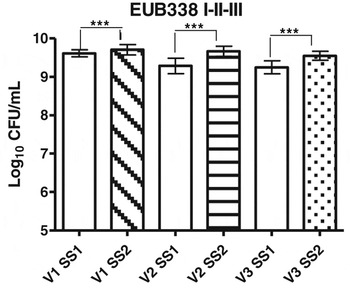 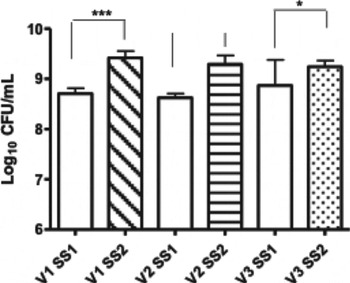 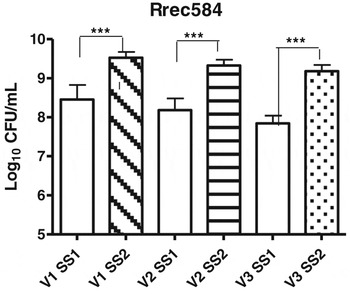 Fig. 4. Mean concentrations of short-chain fatty acids across all vessels of the colonic models.

NUTRIOSE® administration resulted in increased counts of total bacteria (P<0.001) and key butyrate-producing bacteria, Clostridium cluster XIVa (P<0.001) and Roseburia subcluster (P<0.001). Concentrations of butyrate, a SCFA with purported energy metabolism and appetite-regulatory properties( 5 ), concomitantly increased in all 3 vessels of the colonic models (P<0.01). In conclusion, NUTRIOSE® fermentation had a favourable, butyrogenic, effect on the gut ecosystem, thus providing evidence for its nutritional potential for obesity and related metabolic diseases.

This investigation was supported by Roquette, Lestrem, France.