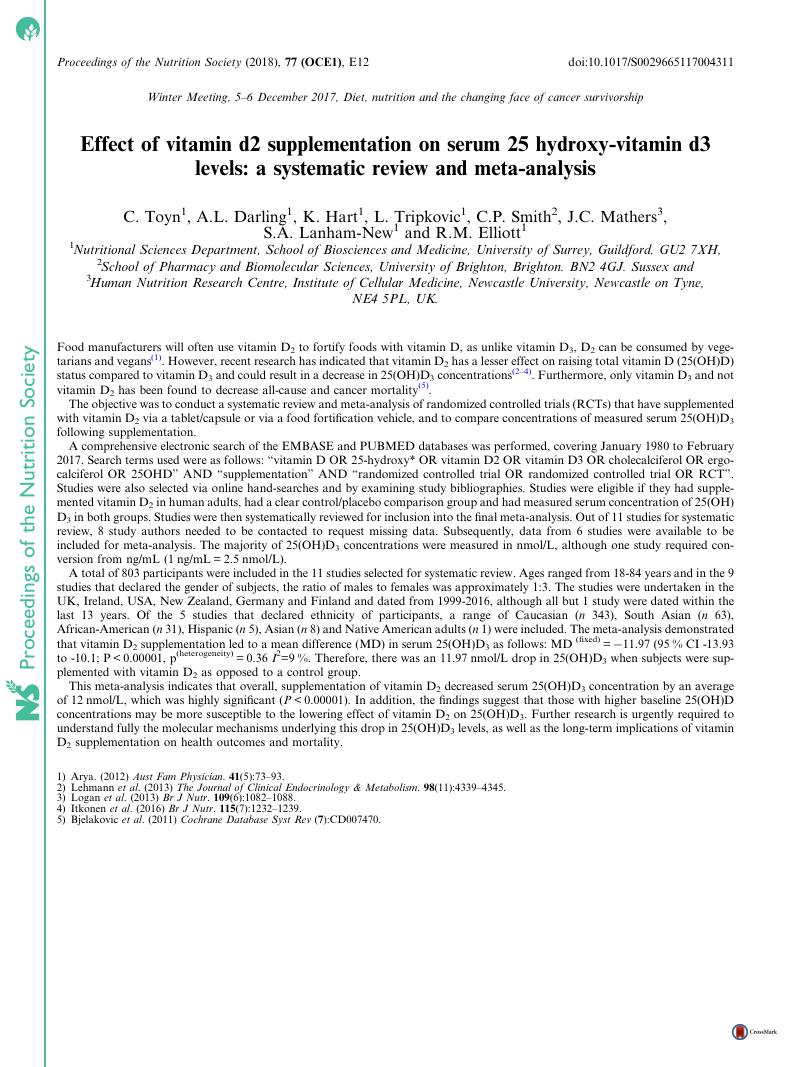 An abstract is not available for this content so a preview has been provided. To view the full text please use the links above to select your preferred format.
Type
Abstract
Information
Proceedings of the Nutrition Society , Volume 77 , Issue OCE1: Winter Meeting, 5–6 December 2017, Diet, nutrition and the changing face of cancer survivorship , 2018 , E12
DOI: https://doi.org/10.1017/S0029665117004311[Opens in a new window]
Copyright
Copyright © The Authors 2018

Food manufacturers will often use vitamin D2 to fortify foods with vitamin D, as unlike vitamin D3, D2 can be consumed by vegetarians and vegans( 1 ). However, recent research has indicated that vitamin D2 has a lesser effect on raising total vitamin D (25(OH)D) status compared to vitamin D3 and could result in a decrease in 25(OH)D3 concentrations( Reference Lehmann 2 – Reference Itkonen 4 ). Furthermore, only vitamin D3 and not vitamin D2 has been found to decrease all-cause and cancer mortality( Reference Bjelakovic 5 ).

The objective was to conduct a systematic review and meta-analysis of randomized controlled trials (RCTs) that have supplemented with vitamin D2 via a tablet/capsule or via a food fortification vehicle, and to compare concentrations of measured serum 25(OH)D3 following supplementation.

A comprehensive electronic search of the EMBASE and PUBMED databases was performed, covering January 1980 to February 2017. Search terms used were as follows: “vitamin D OR 25-hydroxy* OR vitamin D2 OR vitamin D3 OR cholecalciferol OR ergocalciferol OR 25OHD” AND “supplementation” AND “randomized controlled trial OR randomized controlled trial OR RCT”. Studies were also selected via online hand-searches and by examining study bibliographies. Studies were eligible if they had supplemented vitamin D2 in human adults, had a clear control/placebo comparison group and had measured serum concentration of 25(OH)D3 in both groups. Studies were then systematically reviewed for inclusion into the final meta-analysis. Out of 11 studies for systematic review, 8 study authors needed to be contacted to request missing data. Subsequently, data from 6 studies were available to be included for meta-analysis. The majority of 25(OH)D3 concentrations were measured in nmol/L, although one study required conversion from ng/mL (1 ng/mL = 2.5 nmol/L).

This meta-analysis indicates that overall, supplementation of vitamin D2 decreased serum 25(OH)D3 concentration by an average of 12 nmol/L, which was highly significant (P < 0.00001). In addition, the findings suggest that those with higher baseline 25(OH)D concentrations may be more susceptible to the lowering effect of vitamin D2 on 25(OH)D3. Further research is urgently required to understand fully the molecular mechanisms underlying this drop in 25(OH)D3 levels, as well as the long-term implications of vitamin D2 supplementation on health outcomes and mortality.