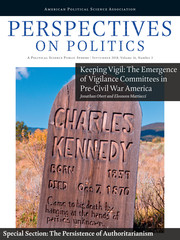 Special Section: The Persistence of Authoritarianism