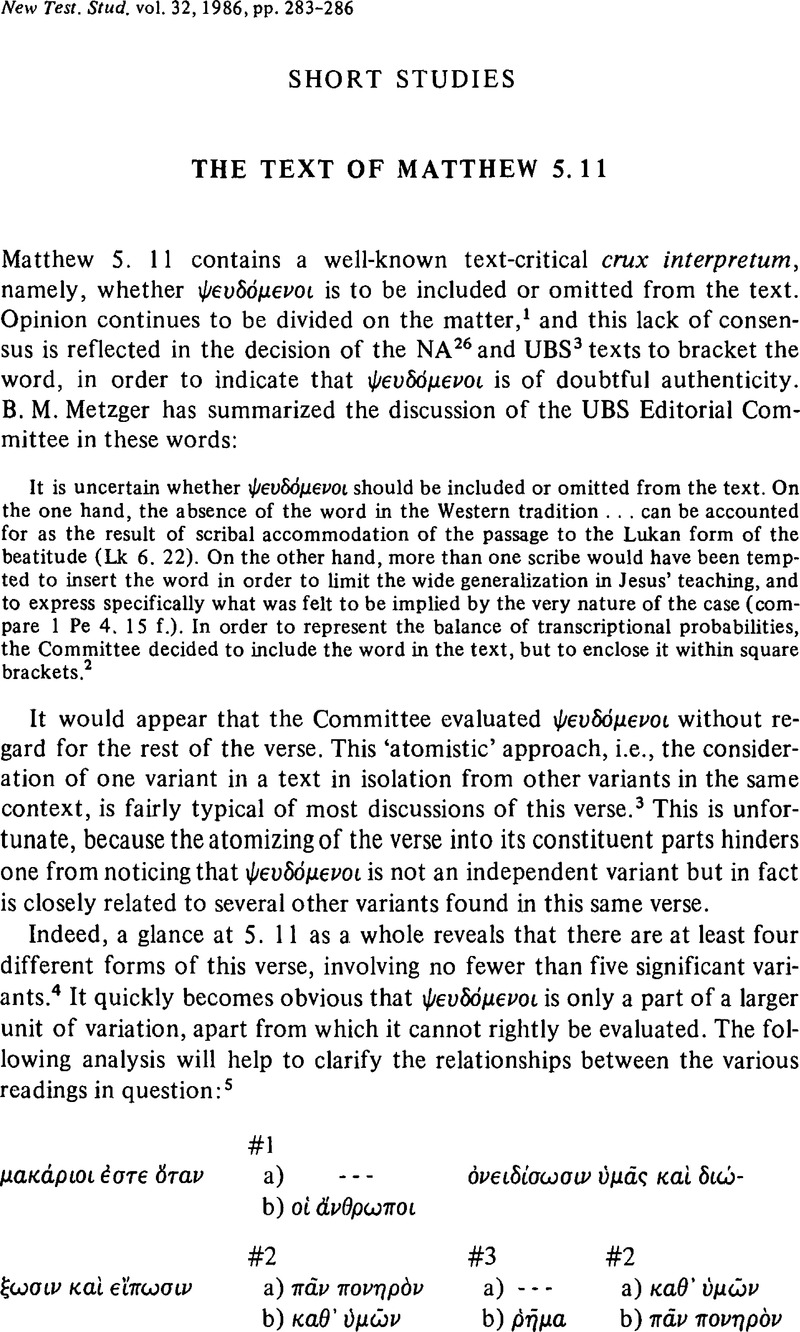 [4] NA26 provides data for a total of seven variants in v 11. One of these, however, - δıωξωσω] δıωξουσıν א (D) W Δ Θ f13pc-‘natürlich reiner Schreibfehler ist’ (Weiss, B., Textkritik, 67), and has no value for determining textual relationships. The utility of a second variant (the transposition of ονεıδıσωσıν and δıωξωσıν by D 33 h k syc mae bo) is also suspect. The similar-sounding words could easily have been unconsciously interchanged during the copying process, or, as McNeile suspects (Matthew, 53), the change may be a harmonization to Luke 6. 22. If one should include this latter variant in an (analysis of 5. 11, it would 1) further support (the close connection observed between D, h, and k; and 2) place the reading of mae in the category of a ‘mixed’ text.

[5] The following textual evidence and symbols are those of NA26, with the exception that ‘Maj’ is used (instead of the Gothic capital M) as a symbol for the ‘Byzantine’ or ‘Majority’ group of manuscripts.

[6] The Old Syriac readings deserve notice. The double harmonization to Lucan passages (add οı ανθρωποı with 6. 22, and substitute του ονοματος μου with 21. 12) clearly links together syS and syC. Yet there are some notable differences. SyC shares with D the transposition of ονεıδıσωσıν and δıωξωσıν (see note 4 above), yet it has ψενδομενοı; syS omits the latter with D but does not follow D in the former. Interestingly enough, neither follows D in transposing παν πονηρον and καθ' υμων. This passage is in some ways paradigmatic of the complex and confusing situation one encounters in the Old Syriac manuscripts.

[7] Lohmeyer, E., Das Evangelium des Matthäus, ed. by Schmauch, W., 4th ed. (Göttingen: Vandenhoeck & Ruprecht, 1967) 95; Zahn, (Matthäus, 193) describes it as ‘entbehrliche’. Both external and internal considerations support the view that ῤημα is a later gloss or addition: the text form lacking this word both has better early good manuscript support (‘Alexandrian’ and ‘Western’ versus ‘Byzantine’) and best explains the other variant. If ῤημα were original, it is difficult to posit a convincing reason for its omission, while its addition due to the influence of the preceding εıπωσıν is quite understandable.

[8] And also possibly the transposition mentioned in note 4 above.

[9] Against Zahn, (Matthäus, 193), who proposes the reading εıπωσıν καθ' νμων παν πονηρ ον ενεκεν εμου, which is a combination of parts of the two distinctive forms outlined here.

[11] It is scarcely to be doubted that the changes wrought on v 11 which resulted in the (B) form of text were intentional, since modifications of such magnitude and coherence are not made thoughtlessly. The suggested time frame for the (B) text is based on its presence in the Old Latin textual tradition, whose origins lie somewhere in the period A.D. 175–200; the intentional ‘edjtorial’ activity that resulted in (B) must therefore have occurred some time prior to ca. A.D. 175. On the subject of early editorial activity and the Bezan text of Matthew, we further M. W. Holmes, ‘Early Editorial Activity and the Text of Codex Bezae in Matthew’ (Ph.D. dissertation, Princeton Theological Seminary, 1984).