Re-Enter the Pre-existent Christ in Philippians 2.5–11? 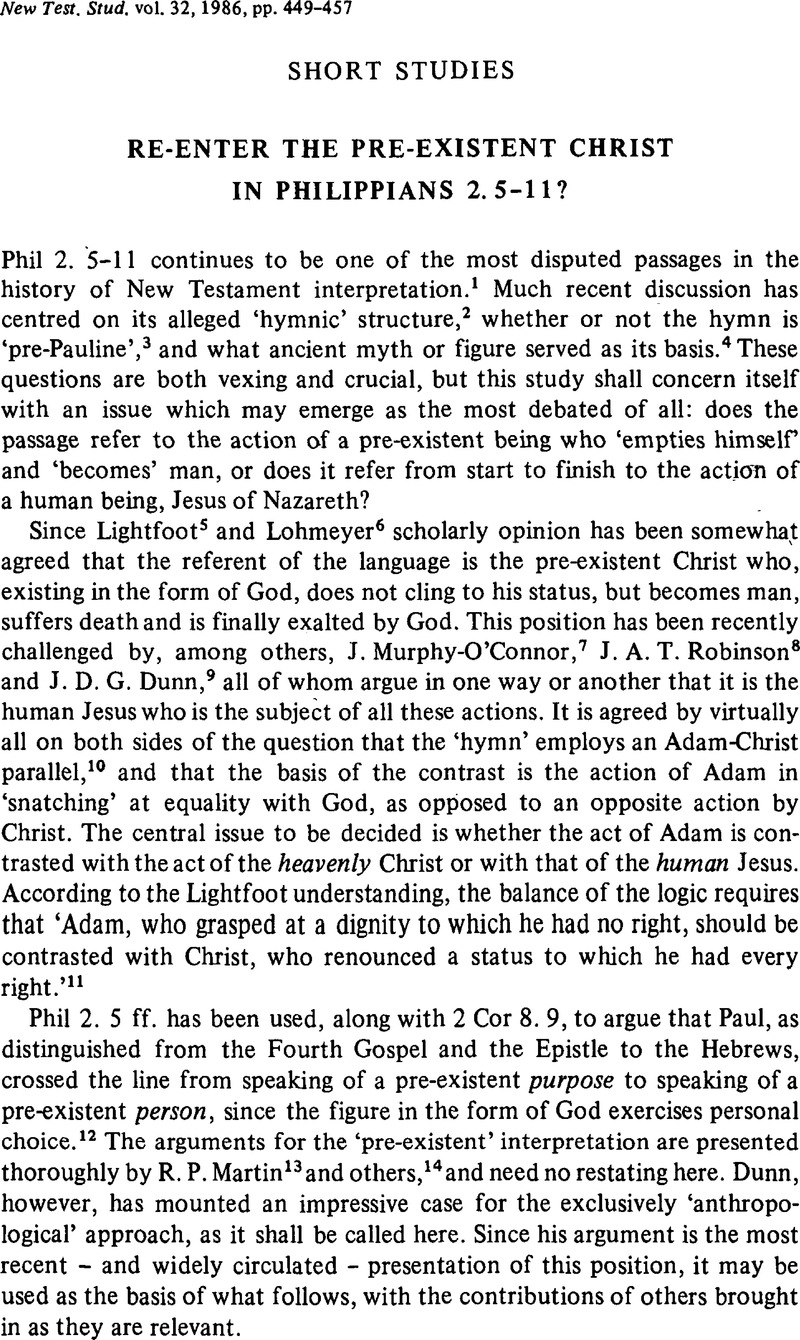 [1] Cf. the authoritative survey of the history of the interpretation of the passage in Martin, R. P., Carmen Christi (Cambridge, 1967).

[2] The History of Religions school (and German opinion in general) has tended toward the view that the verses are non-Pauline in terms of authorship and thought, while British opinion on the whole has tended toward the view that, if the verses are not by Paul himself, they are by someone who was close to Paul (cf. Beare, F. W., A Commentary on the Epistle to the Philippians (London, 1969) 30.Furness, J. M., ‘Behind the Phijppjans Hymn’, ET 79 (1967–1968) 178, who compares Phil 2 with other Pauline passages such as 1 Cor 13. and 15), sees it as a ‘spontaneous expression of the writer's christological faith and the fine, poetic language as a natural consequence of the heightened feeling of this section of the epistle’. Gibbs, J. G., ‘The Relation between Creation and Redemption according to Phil. II 5–11’, NT 12 (1970) 273, stresses the unity of the hymn with its context: ‘Clearly Paul did not begin in his letter with cosmic or metaphysical speculations which then were loosely related to Jesus of Nazareth.’ We shall assume in this study that the verses, whether by Paul or not, represent what Paul wished to say at that point in his argument.

[3] This phrase, as commonly used, is singularly vague. Does it refer to something which was written before Paul's lifetime, before his conversion, or before his writing of the letter? It is, of course, extremely difficult to distinguish those places where Paul draws upon a tradition which antedates him (or was framed independently of him) from those places where he draws upon a tradition which he helped to frame. One criterion should be whether the tradition is attested more widely than in Paul's writings.

[4] Fumess, 178 ff., has catalogued the various parallels which have been drawn: Alexander, Heracles, Nero, Caligula, Lucifer, Adam and the Servant. Contra Chadwick, H., ‘St. Paul and Philo of Alexandria’, BJRL 48 (1965–1966) 301, the nearest analogy to Phil 2 is not Plutarch's descrip tion of Alexander's behaviour in Asia, nor are the parallels with Heracles and the two Roman emperors close enough. The ideas surrounding Lucifer depend too much upon non-biblical tra dition. Käsemann, E., ‘A Critical Analysis of Phil. 2.5–11’, Journal of Theology and Church 5 (1968) 45–88, argues for an ‘anthropos myth’ as enshrined in the Hermetic tract Poimandres (cf. also Fuller, R. H., The Foundations of New Testament Christology (Collins, 1976) 76 f.) and Philo. But it is now felt by many that Phio and Poimandres, texts which were thought to speak of the descent of a heavenly man, actually speak of the origin of a heavenly man, who in all likelthood is Adam (i.e. mankind in general) (cf., e.g. Rawlinson, A. E. J., The New Testament Doctrine of the Christ (London, 1926) 125 ff.; Dodd, C. H., The Bible and the Greeks (London, 1954) 145 ff.; and Caird, G. B., Paul's Letters from Prison (Oxford, 1976) 103 f.). The only two valid possibilities which remain are Adam and the Servant.

[16] While Dunn is in general agreement with Murphy-O'Connor, they differ at this point. For Murphy-O'Connor, 2.6b speaks of something already possessed by Christ. However, he defines this not as ‘equality’ but as the state of being ‘like God’. He bases this on the allegedly weaker force of the adverb 'ίσa as opposed to the adjective 'ίσος, which would denote equality. But this distinction cannot be sustained. The very parallel he cites (following P. Grelot) for this use of ίσα, Odyssey XV, 520 (‘our people already honours him as if – ίσα – he were God’) would allow 2. 6 to read ‘although he was in the form of God, he did not consider being [honoured] as God [i.e. virtual equality] a thing to be grasped’. Murphy-O'Connor's limitation of being ‘as God’ to the notion of incorruptibility (free access to the tree of life), is, of course, possible, but it does not appear to be as convincing as is Dunn's argument for a more thoroughgoing equality.

), i.e. it speaks of Christ, simply, as ‘son of Adam’. This would provide an entirely different nuance from Rom 8. 3: όμοιωμα would not in any way distinguish Christ from man; it would mean a complete identity. In this case έν όμοιώματι àνθρέπων would have no bearing per se on the notion of human sinfulness, but would refer, simply, to the normal process of birth.

[18] As in the case of όμοιωμα, the use of σϰμα in 2. 7c is usually seen as indicating a nuance of difference: for Beare (q.v.) it means ‘something more within the human frame’. Martin, , Carmen Christi, 207, however, denies σϰμα any notion of differentiation from normal humanity: it means, simply, that ‘his σϰμα was such that those who saw Him gained the impression that He was a man … for it was by His σϰμα that this was registered’.

[19] The point at which Christ's ‘richness’ becomes ‘poverty’ is somewhat ambiguous (see below).

[20] Contra Fuller, 236, n. 10, for whom ‘the pie-existence-incarnation christology is so wide spread that it can hardly be called specifically Pauline’.

[21] Cf., e.g. Caird, , Letters, 103 f. The pre-existence of Christ as man cannot be argued from 1 Cor 15. 47–9, where he is referred to as ‘the man from heaven’ (in contrast to Adam, ‘the man of dust’), since Paul makes it clear that the heavenly man follows Adam rather than precedes him. Dunn rightly interprets the 1 Cor passage as referring to Christ as the man of the new creation, whose image Christians will bear when he returns from heaven (Christology, 107 f., 308, n. 41).

[23] Murphy-O'Connor (30–8) accuses Martin, Moule and others of reading the hymn in the light of a pre-judgement towards pre-existence, but is he not guilty of prejudice in the other direction when he says, p. 39, that ‘since the hymn deals with Christ in his concrete terrestrial condition, one should begin with the working hypothesis that the author views Christ as man, and only if this hypothesis fails to explain the rest of the evidence should one envisage the hypothesis that he is a being of a higher order’ (italics mine)? To begin with the assumption that the hymn deals with Christ only in his ‘concrete terrestrial condition’ must be the result of a prior decision that ‘being like’ God could only be true of man. But the pre-temporal Logos, as God's ϰαρακτήρ (for this usage in Phio, cf. Withamson, R., Phio and the Epistle to the Hebrews (Leiden, 1970) 428), could be said to be ‘like God’.

[29] The semitic features of the passage were well demonstrated by Lohmeyer, and, despite its Hellenjstic images and concepts, it is generally assumed that the hymn could contain direct trans lations of the Hebrew OT (cf. Murphy-O'Connor, 40).

[35] Dunn's, (Christology, 117) appeal to Phil 3. 21, which speaks of ‘refashioning (μετασϰηματισει) our body of lowliness’, cannot anchor σϰήμα in 2. 8 to a notion of sinful humanity lacking the glory for which Adam was created in Ps 8. 4 ff. The fact that μορφή and its verbal form can be used for (a) Christ's pre-kenotic state (2. 6) and (b) the subsequent glorified body (3. 21) as well as the lowly state of a slave shows the fluidity with which such terms are used by Paul. Robinson, , Human Face of God, 164 f., appeals to the reversal of the words of the hymn in ch. 3; he suggests that ‘the state of being in the form of God is just as human as that of our present dishonour – in fact more truly and richly so’ (cf. Phil 3. 7–11), 20 f., where Paul wishes to be ‘found’ (ευρεθω) in him… being conformed (σνμμορφιςόμενος) to his death… who will refashion (μετασϰηματισει) our body of lowliness (σωμα τής τάπεωςενος) to be conformed (σύμμορφον to the body of his glory’). But what supplies the basis of the contrast in ch. 3 is undoubtedly ‘the form of a servant’ as opposed to the resurrected form of glory. The first usage of μορφή (τού θεού, 2. 6) is not involved, and it is not apparent what relevance ch. 3 has for it. Paul is not to be conformed to Christ's prior μορφή (θεοφ), but to that which comes after the μορφή δονλού, i.e. the exalted form. It is impossible to anchor terms such as μορφή or σϰήμα to one nuance in chs. 3 and 4.

[36] On the one hand, the statement that μορφή was chosen over εικών ‘because there was no clear idea in either Jewish or earliest Christian thought that Adam had lost God's image’ (Christology, 311, n. 70) seems to imply that, for Dunn, the hymn-writer wanted to stress that the image had been lost. On the other hand, his emphasis (ibid., 116) on the ambiguity in the Genesis narra tive of what Adam lost and the supposed ambiguity carried over into the Philippian hymn, coupled with his generalizing approach to the kenosis as during Jesus' ‘whole life’ (ibid., 120), makes any separation into clearly cut stages impossible.

[39] This is a much debated issue. Those arguing for the Servant Song background include faux, L. Cer, Le Christ dons Ia Théologie de St. Paul (1951) 283 ff.; Robinson, H. Wheeler, The Cross in the Old Testament (London, 1955) 103 ff.; Talbert, 152 f.;Davies, 274, etc. There is something to be said for this view. But: (a) The dearth or absence elsewhere in Paul of Servant imagery (cf., e.g. Caird, , Letters, 102) would seem to argue against it. (b) The verbal similarities presented by Cerfaux depend too much on Aquila's version of the LXX and the assumption that the hymn writer had an identical Vorlage. (C) Even if the ειδος of Isa 52. 4 and 54. 2 is synonymous with the μορφή of the hymn, there is nothing in the Servant Songs to suggest that the Servant ever existed in ειδος/μορφήθεού. It is only by combining Servant and Adam speculation that it becomes possible – but this is a multiplication of hypotheses. Using Occam's razor, all features of the Philippian passage can be explained from a background of Pauline-style thinking about Adam and his bondage (cf. Rom 1). (d) The subsequent Lordship of Christ over the authorities in Phil 2. 10 would suggest, in the con text of Pauline theology elsewhere, his previous δονλεια under them (so Fuller, 209, who speaks of his ‘thralldom to the powers of evil’ in Phil 2).

[42] Stanton, G. N., ‘Incarnational Christology in the New Testament’, in Incarnation and Myth: The Debate Continued (London, 1977) 153 ff., states that the ‘sending of the Son’ in Gal 4. 4 may be assumed, in the light of Paul's statements elsewhere, to imply pre-existence. This, however, does not follow if the ‘sonship’ for Paul is a human category drawn from Israel's experience. In neither Phil 2. 5–11 nor 2 Cor 8. 9 is Christ referred to as ‘Son’.

[43] For Dunn, , Christology, 122, this new state begins at the point where ‘the richness of his communion with God… is [set] in sharp contrast with the poverty of his desolation on the cross’(122).

[44] ibid., 119. Dunn sees Phil 2 as similar to Heb 2.6–9 in that it depicts ‘the divine program for man being run through again in Jesus’ (117). On p. 118 he runs the ώς in σϰήματι ερεθειςἃνθρωπος together with έταπεινωσεν so as to read ‘as man he humbled himself’, i.e. representation. But this is forced: ώς must be linked with what precedes (‘being found as man’), not with what follows.

[45] ibid.: ‘Since the thought is dominated by the Adam/Christ parallel and contrast, the indivi dual expressions must be understood within that context. The terms used in the hymn do not have any independent value; their sense is determined by their role within the Adam christology…’(italics his).

Re-Enter the Pre-existent Christ in Philippians 2.5–11?