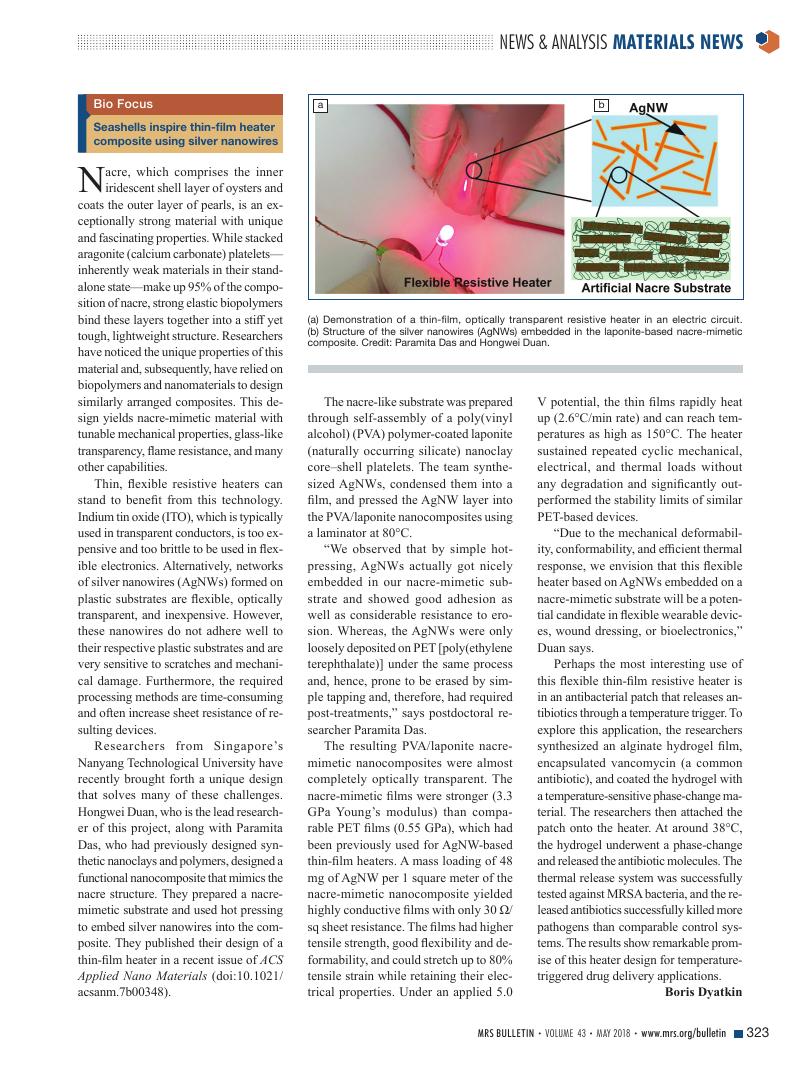 An abstract is not available for this content so a preview has been provided. To view the full text please use the links above to select your preferred format.
Type
Materials News
Information
MRS Bulletin , Volume 43 , Issue 5: Materials for Advanced Semiconductor Memories , May 2018 , pp. 323
DOI: https://doi.org/10.1557/mrs.2018.104[Opens in a new window]
Copyright
Copyright © Materials Research Society 2018

Nacre, which comprises the inner iridescent shell layer of oysters and coats the outer layer of pearls, is an exceptionally strong material with unique and fascinating properties. While stacked aragonite (calcium carbonate) platelets—inherently weak materials in their standalone state—make up 95% of the composition of nacre, strong elastic biopolymers bind these layers together into a stiff yet tough, lightweight structure. Researchers have noticed the unique properties of this material and, subsequently, have relied on biopolymers and nanomaterials to design similarly arranged composites. This design yields nacre-mimetic material with tunable mechanical properties, glass-like transparency, flame resistance, and many other capabilities.

Thin, flexible resistive heaters can stand to benefit from this technology. Indium tin oxide (ITO), which is typically used in transparent conductors, is too expensive and too brittle to be used in flexible electronics. Alternatively, networks of silver nanowires (AgNWs) formed on plastic substrates are flexible, optically transparent, and inexpensive. However, these nanowires do not adhere well to their respective plastic substrates and are very sensitive to scratches and mechanical damage. Furthermore, the required processing methods are time-consuming and often increase sheet resistance of resulting devices.

Researchers from Singapore’s Nanyang Technological University have recently brought forth a unique design that solves many of these challenges. Hongwei Duan, who is the lead researcher of this project, along with Paramita Das, who had previously designed synthetic nanoclays and polymers, designed a functional nanocomposite that mimics the nacre structure. They prepared a nacre-mimetic substrate and used hot pressing to embed silver nanowires into the composite. They published their design of a thin-film heater in a recent issue of ACS Applied Nano Materials (doi:10.1021/acsanm.7b00348).

(a) Demonstration of a thin-film, optically transparent resistive heater in an electric circuit. (b) Structure of the silver nanowires (AgNWs) embedded in the laponite-based nacre-mimetic composite. Credit: Paramita Das and Hongwei Duan.

The nacre-like substrate was prepared through self-assembly of a poly(vinyl alcohol) (PVA) polymer-coated laponite (naturally occurring silicate) nanoclay core–shell platelets. The team synthesized AgNWs, condensed them into a film, and pressed the AgNW layer into the PVA/laponite nanocomposites using a laminator at 80°C.

“We observed that by simple hot-pressing, AgNWs actually got nicely embedded in our nacre-mimetic substrate and showed good adhesion as well as considerable resistance to erosion. Whereas, the AgNWs were only loosely deposited on PET [poly(ethylene terephthalate)] under the same process and, hence, prone to be erased by simple tapping and, therefore, had required post-treatments,” says postdoctoral researcher Paramita Das.

The resulting PVA/laponite nacre-mimetic nanocomposites were almost completely optically transparent. The nacre-mimetic films were stronger (3.3 GPa Young’s modulus) than comparable PET films (0.55 GPa), which had been previously used for AgNW-based thin-film heaters. A mass loading of 48 mg of AgNW per 1 square meter of the nacre-mimetic nanocomposite yielded highly conductive films with only 30 Ω/sq sheet resistance. The films had higher tensile strength, good flexibility and deformability, and could stretch up to 80% tensile strain while retaining their electrical properties. Under an applied 5.0 V potential, the thin films rapidly heat up (2.6°C/min rate) and can reach temperatures as high as 150°C. The heater sustained repeated cyclic mechanical, electrical, and thermal loads without any degradation and significantly outperformed the stability limits of similar PET-based devices.

“Due to the mechanical deformability, conformability, and efficient thermal response, we envision that this flexible heater based on AgNWs embedded on a nacre-mimetic substrate will be a potential candidate in flexible wearable devices, wound dressing, or bioelectronics,” Duan says.

Perhaps the most interesting use of this flexible thin-film resistive heater is in an antibacterial patch that releases antibiotics through a temperature trigger. To explore this application, the researchers synthesized an alginate hydrogel film, encapsulated vancomycin (a common antibiotic), and coated the hydrogel with a temperature-sensitive phase-change material. The researchers then attached the patch onto the heater. At around 38°C, the hydrogel underwent a phase-change and released the antibiotic molecules. The thermal release system was successfully tested against MRSA bacteria, and the released antibiotics successfully killed more pathogens than comparable control systems. The results show remarkable promise of this heater design for temperature-triggered drug delivery applications.