3D self-assembly of microgel dispersion coordinated by an electric field

Self-assembly is a powerful tool for the bottom-up manufacturing of advanced materials and devices. As discussed in an article published in a recent issue of Soft Matter (doi:10.1039/c6sm00857g), Jérôme J. Crassous of Lund University and Ahmet F. Demirörs of ETH Zürich have demonstrated the ability to direct the self-assembly of microgel colloids to control microscale assembly to the level of individual particles.

Field-directed self-assembly (Field-DSA) exploits the interactions between polar particles and electric or magnetic fields to create complex structures. Field-DSA typically lacks spatial control of the assembly process. Crassous and Demirörs, who had been using spheroid and ellipsoid particles, wanted to address this challenge. “We thought that, in addition to location control, we could [also] test orientation control simultaneously by using ellipsoid-shaped particles,” Crassous says.

The microscale particles used in the study consist of a polystyrene core surrounded by a cross-linked microgel layer of poly(N-isopropylmethylacrylamide), or PNIPMAM. An electric field was generated between an indium tin oxide (ITO)-coated top plate and microfabricated gold electrodes. The electrodes alternated with voids in a rectangular array of conductive and non-conductive regions, which resulted in complex electric fields. “It resembles having an array of baskets and many apples, where we could tell the apples simultaneously to sit in the baskets or to stay aside,” Crassous says. By varying the frequency of the applied alternating electric fields, Crassous and Demirörs had the control they were hoping for. 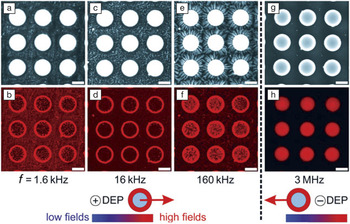 The electric field ranged from 1.6 kHz to 3 MHz, at 83 V/mm. Below 160 kHz, the spherical and ellipsoidal microgel dispersions exhibited a positive dielectrophoretic response, where the particles localized both over the gold electrodes and near the void-electrode boundary—where the electric-field gradient was highest. Interestingly, over the range of positive dielectrophoresis, the particles diffused more into the bulk as the frequency increased toward 160 kHz. At 3 MHz, the particles experienced a negative dielectrophoresis and localized in the voids. The ellipsoidal particles aligned themselves with the local field direction, in either hexagonal or pyramidal structures.

The particles were also thermoresponsive, and the researchers could vary their specific volume in the dispersion by varying the temperature, pointing to the possibility of freezing the particles in a solid arrangement, much like three-dimensional printing—but with intriguing new capabilities.

In the future, Crassous and Demirörs would like to further develop their fundamental understanding of the mechanisms and non-equilibrium dynamics at play. They would also like to examine the roles of the electrode shape, and substitute a second electrode for the ITO top plate. Crassous says, “Following the nature of the building blocks and their organization at different length scales, we envision in the future its application for the creation of new materials with appealing optical, acoustic, or electronic properties.”