Latest issue of The Journal of Ecclesiastical History 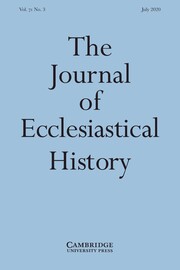