Journal of Developmental Origins of Health and Disease 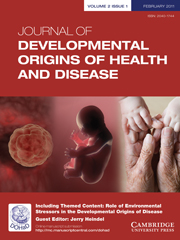 Themed Content: Role of Environmental Stressors in the Developmental Origins of Disease