In this paper, the recent studies of laboratory astrophysics with strong magnetic fields in China have been reviewed. On the Shenguang-II laser facility of the National Laboratory on High-Power Lasers and Physics, a laser-driven strong magnetic field up to 200 T has been achieved. The experiment was performed to model the interaction of solar wind with dayside magnetosphere. Also the low beta plasma magnetic reconnection (MR) has been studied. Theoretically, the model has been developed to deal with the atomic structures and processes in strong magnetic field. Also the study of shock wave generation in the magnetized counter-streaming plasmas is introduced.

1 Magnetic-field generation in the laboratory

The experiment layout is shown in Figure 1. Eight SG-II beams with total energy of 2 kJ in 1 ns were focused on a planar plate attached on the end of the open-ended coil. During the laser irradiating the planar plate, fast electrons were generated and expelled out from the laser focal spot. This would lead to a high electrostatic potential grown up near the laser focus and charged the target. The potential dragged the background cold electrons to the focus to neutralize the target. This cold electron current in the target coil would create a strong magnetic-field pulse. The strength of the magnetic field was measured by a pre-calibrated B-dot.

Figure 1. Schematic view of the experimental setup at the Shenguang-II laser facility. Eight laser beams at 351 nm were divided into two bunches and focused onto both sides of the planar plate simultaneously.

Table 1. Summary of magnetic-field strength, and current in the coil.

The laser parameters, magnetic-field strength, current and energy conversion efficiency, are all summarized in Table 1. The field strength at the coil center,

$B_{\text{center}}$, is generally increases as a function of

MR is a universal physical process in plasmas, in which the stored magnetic energy is converted into high-velocity flows and energetic particles[Reference Yamada10, Reference Zweibel and Yamada11]. The model of MR is widely applied in astrophysics, including investigations on solar flares[Reference Sweet and Lehnert12, Reference Parker13], star formation[Reference Kulsrud14], the coupling of solar wind with earth magnetosphere, accretion disks and Gamma-ray bursts[Reference Goodman and Uzdensky15], and so forth. The process of MR has been studied in detail by dedicated magnetic-driven experiments[Reference Yamada, Yamada, Kulsrud and Ji16]. Based on the quasi-steady state of the self-generated magnetic fields in laser plasmas, we reconstruct the topology of MR and model the loop-top x-ray source[Reference Zhong, Li, Wang, Wang, Dong, Xiao, Wang, Liu, Zhang, An, Wang, Zhu, Gu, He, Zhao and Zhang7], the interaction of solar wind with dayside magnetosphere[Reference Zhang, Zhong, Wang, Pei, Wei, Yuan, Yang, Wang, Li, Han, Yin, Liao, Fang, Yang, Yuan, Sakawa, Morita, Cao, Jiang, Ding, Kuramitsu, Liang, Wang, Li, Zhu, Zhang and Zhao 17] in the laboratory by using SG-II laser facility. The two MR processes modeled in laboratory are shown in Figure 2 as follows.

Figure 2(a) shows a cartoon simulation of the solar flares and the coupling of solar wind with earth magnetosphere. Figure 2(b) shows the x-ray image of laser-driven MR which is designed to be similar to the scheme of a loop-top x-ray source in the solar flares. The reconnection plasma produced on the aluminum (Al) target with two laser beams, and the downward outflow will interact with a preset copper (Cu) target. Two bright x-ray spots are clearly observed due to the laser heating the Al foil target where two laser spots are separated by

$600~\unicode[STIX]{x03BC}\text{m}$. The most striking feature in the image is that a bright x-ray spot at the center of the Cu target is observed just below the downward outflow/jet. The position and the arc shape of the spot are the solid evidence that high speed outflow/jet on the Al foil impacting the plasma generated on the Cu target, a picture clearly resembling the loop-top x-ray source in solar flare observations.

Figure 2. (a) Shows a cartoon simulating the solar flares and the coupling of solar wind with earth magnetosphere. (b) MR model for the loop-top x-ray source, x-ray images taken with Pinhole camera in the experiment. (c) MR model for the interaction of solar wind with magnetosphere, one micro-solar-flare is produced by two intense laser beams interacting with a solid aluminum block, and the outflow interacts with a preset permanent magnetic pole.

Following previous one, another experiment was performed to model the interaction of solar wind with dayside magnetosphere. Figure 2(c) shows the schematic experimental setup and x-ray image for laser-driven MR. One micro-solar-flare[Reference Zhong, Li, Wang, Wang, Dong, Xiao, Wang, Liu, Zhang, An, Wang, Zhu, Gu, He, Zhao and Zhang7] is produced by two intense laser beams interacting with a solid aluminum block. The magnetized outflowing plasma is evident between two plasma bubbles and is used to interact with a preset permanent magnetic pole, then further models dynamic processes in Solar-Earth space. Scaling law shows the present study will be helpful for understanding Solar-Earth space dynamic phenomena. The traces of high-energy electrons are also found moving along with the magnetic separatrix.

Furthermore, we have studied the low beta plasma MR in our recent experiment. This is the first laboratory study of MR with an explicitly controlled magnetic-field environment produced by capacitor-coil target[Reference Fujioka, Fujioka, Zhang, Ishihara, Shigemori, Hironaka, Johzaki, Sunahara, Yamamoto, Nakashima, Watanabe, Shiraga, Nishimura and Azechi18]. The magnetic field measured in laboratory is about dozens of Tesla. Under such strong magnetic-field environment, we have measured the MR outflow. The result proves indirectly the existence of a reconnection-induced electric field in a low beta MR, which could show potential applications in astrophysics and plasma physics, such as the study of reconnection in solar and magnetotail flares.

Magnetic fields are widely existed in universe, from the interior of stars to the astrophysical interstellar medium (ISM). For example, in x-ray binaries the magnetic-field strengths of accreting neutron stars could be larger than

Figure 3. Unfolded spectrum of the descending edge of the main peak of X0115

The atomic structures and processes in strong magnetic field have been studied theoretically by various methods, such as finite element[Reference Shertzer19], Kantorvich[Reference Dimova, Kaschiev and Vinitsky20], semi-classical closed orbit theory[Reference Dimova, Kaschiev and Vinitsky20], finite basis expansion[Reference Zhao and Stancil21] and power series expansion[Reference Kravchenko, Liberman and Johansson22]. Those calculations of the electron wavefunctions are very complicated and hard to be applied to the combination of B- and E-fields. The coulomb wavefunction discrete variable presentation method (CWDVR) is a simple and highly accurate method of investigating the behavior of atomic system in a strong magnetic field up to

Recently, extremely strong magnetic field can be generated using high-power laser in laboratory. Those magnetic fields can be up to thousand Tesla[Reference Fujioka, Fujioka, Zhang, Ishihara, Shigemori, Hironaka, Johzaki, Sunahara, Yamamoto, Nakashima, Watanabe, Shiraga, Nishimura and Azechi18]. Thus, it is very interesting to investigate the properties of matters related to the astrophysics under such a strong magnetic field. Atomic levels are shifted and split in strong magnetic field, which would certainly introduce changes in the opacity of matters. Measurements of the opacity under strong magnetic field are in progress with SG-II laser facility. Effects of the strong magnetic on opacities will be investigated. The results would benefit on the understanding of the energy transport in astrophysics. It could also be a potential candidate to solve the present problems on the opacity in solar convection zones[Reference Bailey, Nagayama, Loisel, Rochau, Blancard, Colgan, Cosse, Faussurier, Fontes, Gilleron, Golovkin, Hansen, Iglesias, Kilcrease, MacFarlane, Mancini, Nahar, Orban, Pain, Pradhan, Sherrill and Wilson24].

Energetic particles are ubiquitous in astrophysical plasmas. However, the physical acceleration process is not well understood. The most remarkable example is the solar energetic particles[Reference Vourlidas, Howard, Esfandiari, Patsourakos, Yashiro and Michalek25]. The kinetic energies of the ejected particles are up to

${\sim}10^{25}~\text{J}$, which are believed to be the most explosive events in the Solar System. Recently, astro-observation[Reference Carley, Long, Byrne, Zucca, Bloomfield, McCauley and Gallagher26] shows that particle acceleration is associated with shock wave, which is driven by the eruption of magnetized plasmoids, called coronal mass ejections (CMEs). Studying the shock wave generation in the magnetized plasmas is important to understand the shock wave acceleration in the Solar System.

$Z=6$, the velocity of the streams

$L=4.5~\text{mm}$. The electron cyclotron radius is much smaller than the ion’s, because of the larger charge-to-mass ratio. The conditions can ensure that it is suitable to study shock wave driven by the magnetized plasmas in laboratory.

Figure 1. Schematic view of the experimental setup at the Shenguang-II laser facility. Eight laser beams at 351 nm were divided into two bunches and focused onto both sides of the planar plate simultaneously.

Table 1. Summary of magnetic-field strength, and current in the coil. 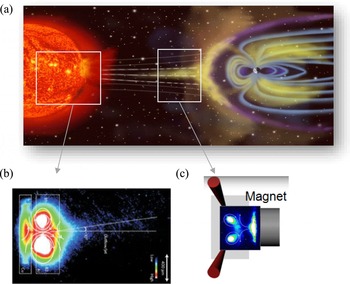 Figure 2. (a) Shows a cartoon simulating the solar flares and the coupling of solar wind with earth magnetosphere. (b) MR model for the loop-top x-ray source, x-ray images taken with Pinhole camera in the experiment. (c) MR model for the interaction of solar wind with magnetosphere, one micro-solar-flare is produced by two intense laser beams interacting with a solid aluminum block, and the outflow interacts with a preset permanent magnetic pole.

Figure 3. Unfolded spectrum of the descending edge of the main peak of X0115