Special Issue: Towards a Global Framework for Health Financing 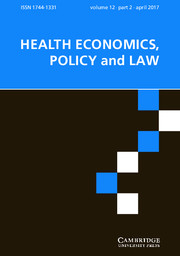