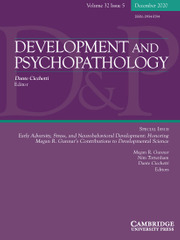 Special Section 2: Early Adversity and Development: Contributions from the Field