The Paeans of Pindar and other New Literature 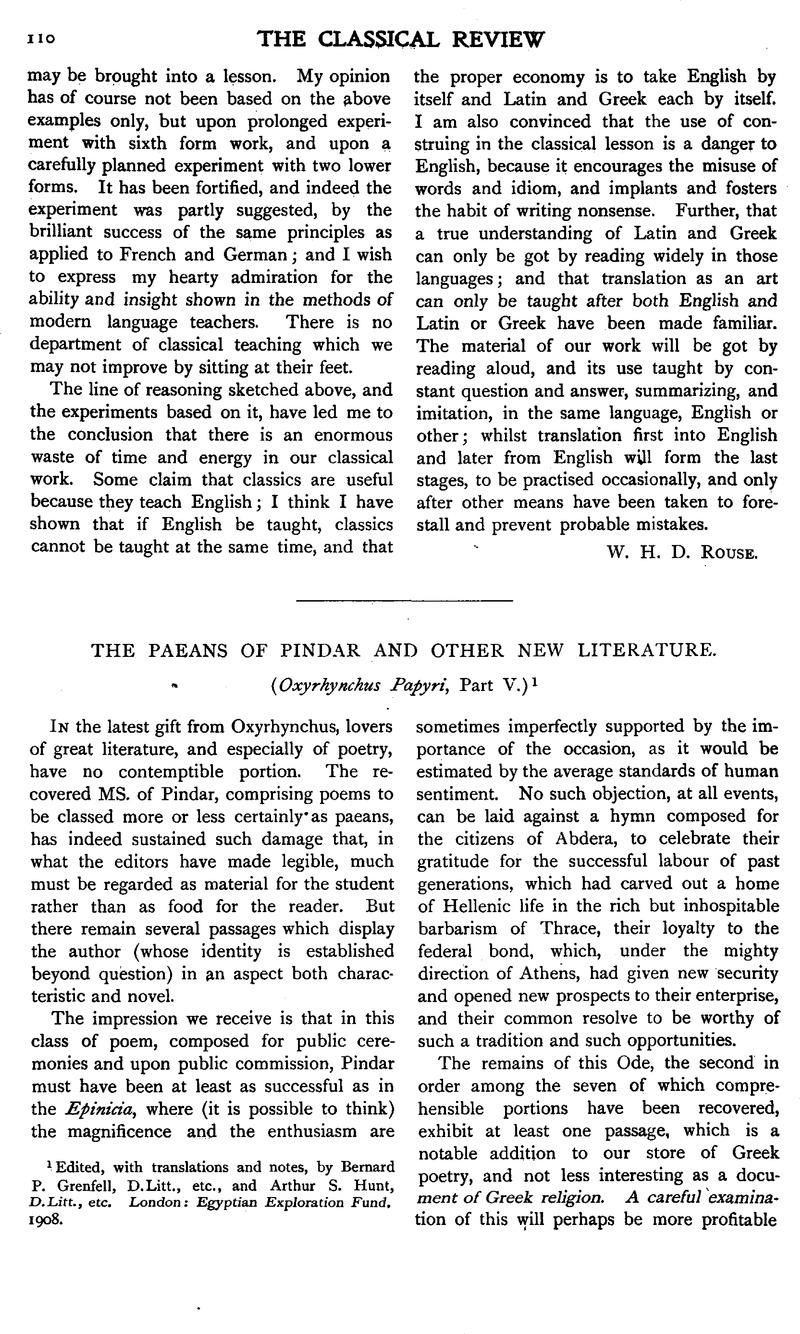 .—‘The descendant should himself carry to [the ancestors] the praise of a nobly spent life,’ Edd. Papyri, citing Nem. vi. 46 ⋯πε⋯ σφιν κ.τ.λ.; but this seems less simple and appropriate.

page 112 note 1 Rather, ‘It was the first of the month (when this befell).’ The difference, though small, is not quite immaterial. See hereafter.—The schol. to v, 77,

as given by the editors, points to a prophecy of the battle; but the essential words are a supplement, and rightly marked as doubtful. In any case the note could not be conclusive; the scholia are often plainly wrong.

page 112 note 2 In English, under such circumstances, we generally use the ‘past future’, and say that the things ‘were to’ happen; Greek, which habitually narrates in the present tense (historical), naturally uses (as we also can do) the simple future.

page 112 note 3 It is conceivable that Pindar wrote ποταμ⋯ς (not ποταμῷ) leaving the dative to be supplied, a more common arrangement, but this supposition is not at all necessary. The arrangement actually given is both correct and clear.

, which may refer to the preparation by which, according to Virgil, the soul is led to desire the renewal of life.

page 114 note 1 Note the imperfect tense of ἄγγελλε, marking that the message is coincident with the coming of the ‘great host’, and is another aspect of it,—‘Hecate was thereby sending a message.’

page 115 note 1 The editors would substitute ἔπιδον for ἔτεκον but, upon consideration of the purpose, ἔτεκον seems to be necessary.

page 115 note 3 Date fixed by reference to Nemean vii.; see below, and the editors' Introduction, p. 20.

page 116 note 1 The practice of Pindar in the Epinicia would admit, quite naturally, the supposition that it is the poet who speaks, identifying himself with his poem and requesting acceptance, nor would this much affect our point. But it does not yet appear, so far as I have observed, that in Paeans he used, or used so freely, this personal manner, less appropriate, if admissible, when his employers were not persons or families, but cities, public bodies, or their deputies appointed for an official performance. An article on this volume in the Berliner Philologische Wochenschrift (Otto Schroeder) cites as examples

page 116 note 2 Poem iv. For the Ceans, to Delos. See the editors' Introduction.

page 117 note 1 That the exactions were ‘authorized’, that is to say, authorized by Delphi, must have been assumed by the Aeginetans themselves, and their displeasure can hardly therefore have rested on the mere epithet.

page 117 note 2 The more easily because the slaying of Achilles is previously mentioned in the paean, vv. 81–86.

. Prof. Housman, whose reading and punctuation I follow, adopts ἄλλων, with the editors, for the imperfect word. If it was so written, one may suspect it to be an error for some contraction of ⋯μφιπ⋯λων, e.g. αμφλων. As the full word occurs in the text (⋯μφιπ⋯λοις), it could bear abbreviation. The meaning seems to be that the temple-ministers, in pursuance of a bad custom (συν⋯θως), tried to seize the sacrifice of Neoptolemus in satisfaction of alleged dues.

The Paeans of Pindar and other New Literature