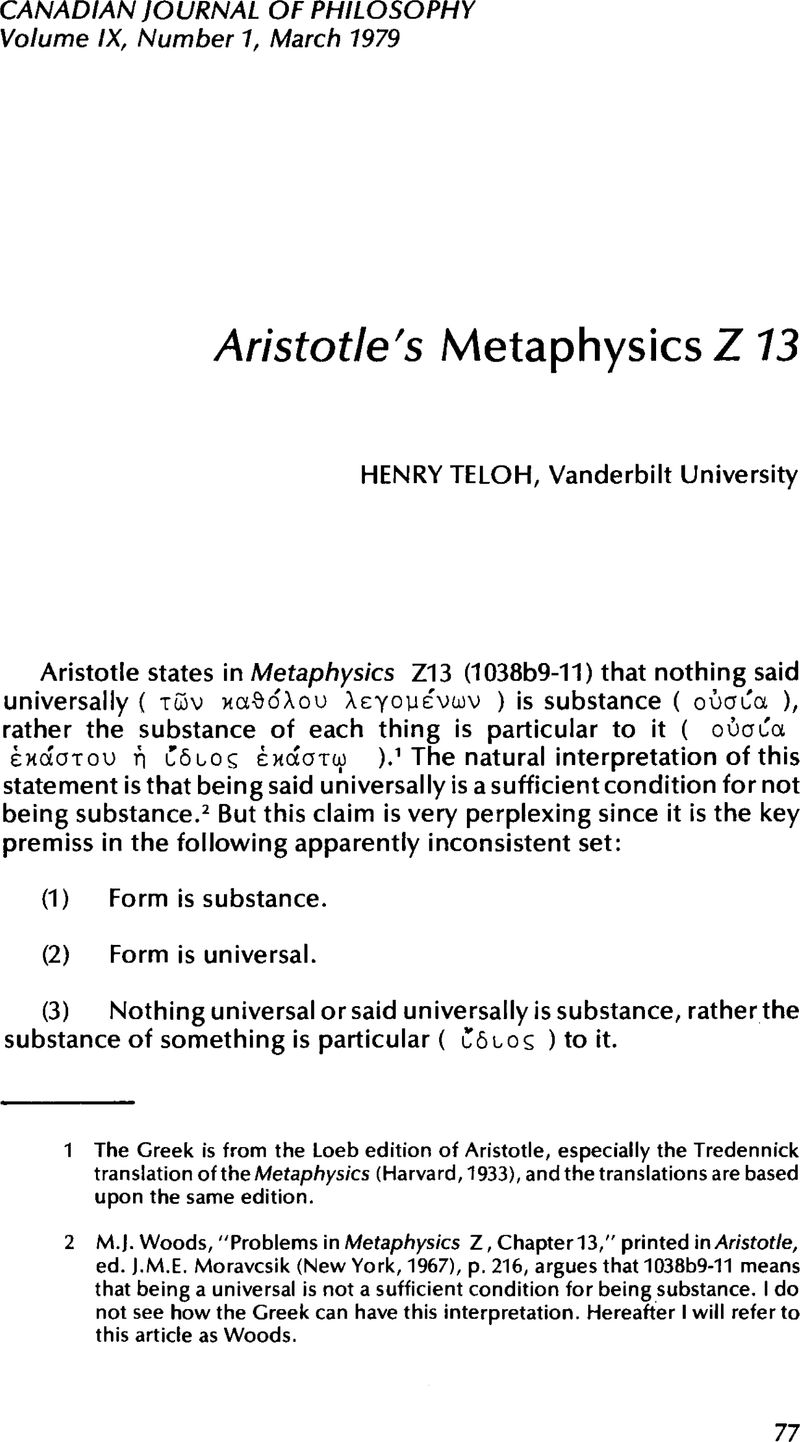 1 The Greek is from the Loeb edition of Aristotle, especially the Tredennick, translation of the Metaphysics (Harvard, 1933), and the translations are based upon the same edition.

2 Woods, M.J. “Problems in Metaphysics Z, Chapter13,” printed in Aristotle, ed. Moravcsik, J.M.E. (New York, 1967), p. 216, argues that 1038b9-11 means that being a universal is not a sufficient condition for being substance. I do not see how the Greek can have this interpretation. Hereafter I will refer to this article as Woods.

7 Other commentators also hold that Z13 attacks the claim that genera are substance, but not the status of species as substance, although their arguments differ from those of Woods. See Elugardo, Reinaldo “Woods on Metaphysics Zeta, Chapter 13,” Apeiron 9 (1975), pp. 30–42, and Albritton, Rogers “Forms of Particular Substances in Aristotle's Metaphysics,” Journal of Philosophy 54 (1957), pp. 704-6. Hereafter I will refer to the latter article as Albritton. I will show that Z13 equally attacks both species and genera.

10 Lesher makes these cogent attacks on Woods and Albritton, see Lesher, p. 170. Even in Z13 Aristotle uses “what is said universally” and “what belongs by nature to many things” interchangeably. See 1038b9-13.

16 Plato's middle period Forms are not universals in Aristotle's sense of “universal,” rather they are paradigmatic individuals. The Forms are common only in that many things can imitate or resemble a single Form. But .in Z13 and 14 Aristotle treats the Platonists’ universals as if they were in things. Plato would, of course, reject this view, since his Forms are separate, pure paradigms: see, for example, Symposium 210-12. Aristotle's Justification for this procedure is given in Met. Z 6; there he argues that the substance or essence of x cannot exist apart from x, and since the Platonists' Forms are, he believes, the substances of phenomena, they must exist in phenomena. Also see 991a12-14, and 991b1-9. The absurdities of Z13 and 14 thus result, in part, from treating the Platonists' Forms as if they were in things. The Platonists would, undoubtedly, contest this treatment, for they do not believe that phenomena are substances in Aristotle's sense, or that the Forms are in phenomena as their substances.

18 Hence Z13 does not support Woods's distinction between non-substance genera and substance species.

19 The argument at 1038b23-29 denies that substances are composed of qualities, for then qualities would be prior to substances in logos, time, and generation, and hence the qualities would be separate. It is, of course, absurd in Aristotle's system for qualities to exist apart from substances, although the Platonists posit separate Forms of qualities. Perhaps 1038b23-29 states a possible Platonists’ rejoinder: If things are not composed of substance Forms, then they are composed of qualities that are then prior to substances. But this is absurd. This rejoinder has force only if these are the only alternatives, but there is a further option: Aristotle's notions of form and matter.

21 I disagree with Ross's interpretation of this passage. See Ross, p. 211.

23 The last paragraph of Z13, at 1039a15-23, appears to be a false aporia, perhaps designed for students. Aristotle states that since a substance is not composed of substances or of non-substances, it is incomposite, and thus indefinable. Aristotle's solution to this problem is that a substance is not composed of “things” but rather is a unity of actuality (form) and potentiality (matter, 1045b15-25).

28 Haring, E. S. “Substantial Form in Aristotle's Metaphysics Z,” Review of Metaphysics 10 (1957), p. 325, believes that in this passage Aristotle's form is “timeless and indifferent to its context”; moreover, its “resemblance …to a Platonic Idea becomes marked.” I show that this interpretation is mistaken.

29 I argue in another paper, “The Universal in Aristotle,” forthcoming in Apeiron that Aristotle's universals are not the substances of concrete individuals. No universal is in re, since universals are unenmattered and in the intellect (see Met. 1052a30-33, 1052b1-2, 1052b16-18, 1075a1-6, in conjunction with De Anima 431a1-2, 417b23-24, and Posterior Analytics 100a6-9). Particular forms are the substances of things because they are in them, but the universal is the result of intellectual processes, and hence it is in the intellect.