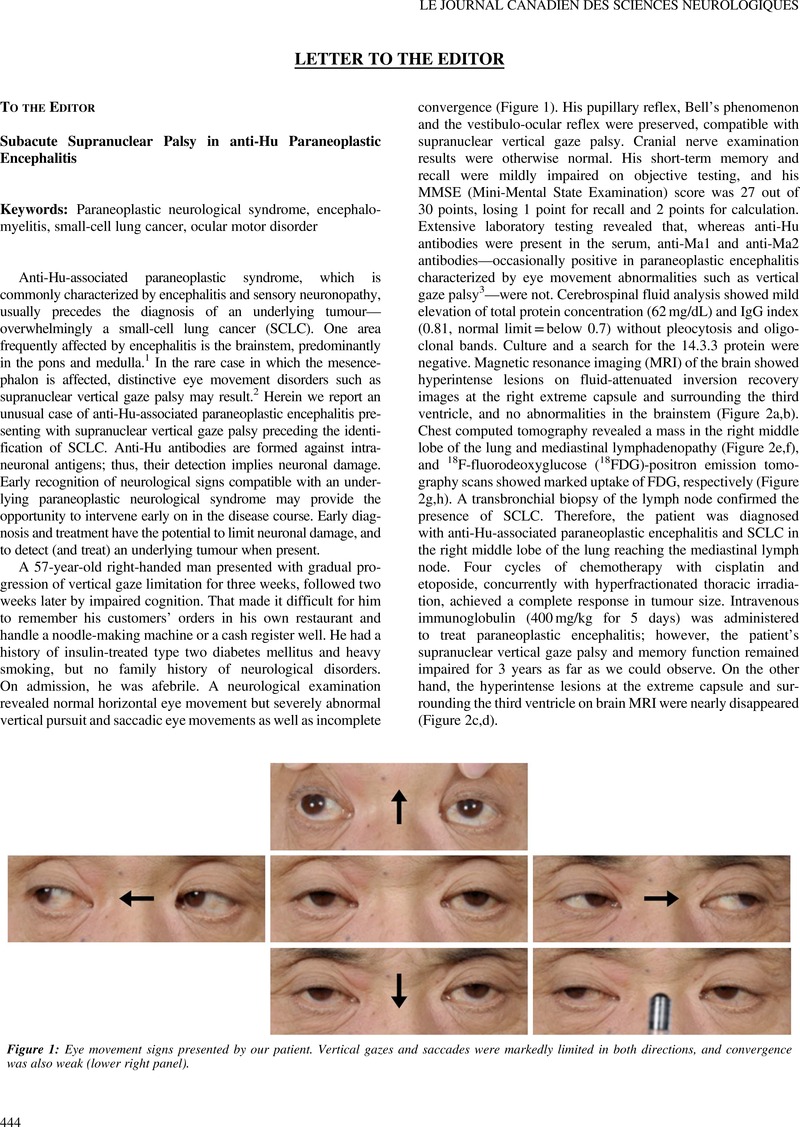 Anti-Hu-associated paraneoplastic syndrome, which is commonly characterized by encephalitis and sensory neuronopathy, usually precedes the diagnosis of an underlying tumour—overwhelmingly a small-cell lung cancer (SCLC). One area frequently affected by encephalitis is the brainstem, predominantly in the pons and medulla.Reference Sillevis Smitt, Grefkens, de Leeuw, van den Bent, van Putten and Hooijkaas 1 In the rare case in which the mesencephalon is affected, distinctive eye movement disorders such as supranuclear vertical gaze palsy may result.Reference Saiz, Bruna, Stourac, Vigliani, Giometto and Grisold 2 Herein we report an unusual case of anti-Hu-associated paraneoplastic encephalitis presenting with supranuclear vertical gaze palsy preceding the identification of SCLC. Anti-Hu antibodies are formed against intra-neuronal antigens; thus, their detection implies neuronal damage. Early recognition of neurological signs compatible with an underlying paraneoplastic neurological syndrome may provide the opportunity to intervene early on in the disease course. Early diagnosis and treatment have the potential to limit neuronal damage, and to detect (and treat) an underlying tumour when present.

A 57-year-old right-handed man presented with gradual progression of vertical gaze limitation for three weeks, followed two weeks later by impaired cognition. That made it difficult for him to remember his customers’ orders in his own restaurant and handle a noodle-making machine or a cash register well. He had a history of insulin-treated type two diabetes mellitus and heavy smoking, but no family history of neurological disorders. On admission, he was afebrile. A neurological examination revealed normal horizontal eye movement but severely abnormal vertical pursuit and saccadic eye movements as well as incomplete convergence (Figure 1). His pupillary reflex, Bell’s phenomenon and the vestibulo-ocular reflex were preserved, compatible with supranuclear vertical gaze palsy. Cranial nerve examination results were otherwise normal. His short-term memory and recall were mildly impaired on objective testing, and his MMSE (Mini-Mental State Examination) score was 27 out of 30 points, losing 1 point for recall and 2 points for calculation. Extensive laboratory testing revealed that, whereas anti-Hu antibodies were present in the serum, anti-Ma1 and anti-Ma2 antibodies—occasionally positive in paraneoplastic encephalitis characterized by eye movement abnormalities such as vertical gaze palsyReference Dalmau, Graus, Villarejo, Posner, Blumenthal and Thiessen 3 —were not. Cerebrospinal fluid analysis showed mild elevation of total protein concentration (62 mg/dL) and IgG index (0.81, normal limit=below 0.7) without pleocytosis and oligoclonal bands. Culture and a search for the 14.3.3 protein were negative. Magnetic resonance imaging (MRI) of the brain showed hyperintense lesions on fluid-attenuated inversion recovery images at the right extreme capsule and surrounding the third ventricle, and no abnormalities in the brainstem (Figure 2a,b). Chest computed tomography revealed a mass in the right middle lobe of the lung and mediastinal lymphadenopathy (Figure 2e,f), and 18F-fluorodeoxyglucose (18FDG)-positron emission tomography scans showed marked uptake of FDG, respectively (Figure 2g,h). A transbronchial biopsy of the lymph node confirmed the presence of SCLC. Therefore, the patient was diagnosed with anti-Hu-associated paraneoplastic encephalitis and SCLC in the right middle lobe of the lung reaching the mediastinal lymph node. Four cycles of chemotherapy with cisplatin and etoposide, concurrently with hyperfractionated thoracic irradiation, achieved a complete response in tumour size. Intravenous immunoglobulin (400 mg/kg for 5 days) was administered to treat paraneoplastic encephalitis; however, the patient’s supranuclear vertical gaze palsy and memory function remained impaired for 3 years as far as we could observe. On the other hand, the hyperintense lesions at the extreme capsule and surrounding the third ventricle on brain MRI were nearly disappeared (Figure 2c,d).

Figure 1 Eye movement signs presented by our patient. Vertical gazes and saccades were markedly limited in both directions, and convergence was also weak (lower right panel).

Anti-Hu paraneoplastic syndrome is associated with lung cancer, most commonly SCLC, and affects variable regions of the nervous system with preferential targeting of the hippocampus, brainstem, spinal cord, and dorsal root ganglia. In affected areas, neuronal loss, axonal damage and cellular infiltrates are characterised,Reference Bernal, Graus, Pifarre, Saiz, Benyahia and Ribalta 4 usually resulting in irreversible neurological deficits. Although Hu antigens, RNA binding proteins highly expressed in the nucleus of neurons, are partly expressed by SCLC cells, anti-Hu antibodies provide a highly valuable diagnostic biomarker of paraneoplastic syndrome and anti-tumoural humoral immunity rather than a direct effector of neuronal dysfunction.Reference Manley, Smitt, Dalmau and Posner 5 , Reference Pignolet, Gebauer and Liblau 6 Anti-Hu associated paraneoplastic encephalitis may affect the brainstem, predominantly the pons and medulla.Reference Sillevis Smitt, Grefkens, de Leeuw, van den Bent, van Putten and Hooijkaas 1 , Reference Saiz, Bruna, Stourac, Vigliani, Giometto and Grisold 2 The brainstem circuitry that controls vertical gaze has been unclear; however, the rostral midbrain reticular formation, especially the rostral interstitial nucleus of the medial longitudinal fasciculus (riMLF), has been hypothesized to mediate supranuclear control of vertical gaze.Reference Strupp, Kremmyda, Adamczyk, Böttcher, Muth and Yip 7 Vertical saccades are generated by both excitatory and inhibitory burst neurons lying in the riMLF. Saccadic innervation from the riMLF is unilateral to depressor muscles (inferior rectus and superior oblique) but bilateral to elevator muscles (superior rectus and inferior oblique), with axons crossing within the oculomotor nucleus. Consistent with this proposal, bilateral riMLF lesions cause loss of all vertical saccades without disrupting other types of eye movement. The interstitial nucleus of Cajal (INC) and posterior commissure (PC) are also important neural structures for the control of vertical gaze. The INC, adjacent and caudal to the riMLF, could be considered to be the neural integrator for vertical gaze and important for vertical gaze-holding. The PC, rostral to the superior colliculi, is a critical route for the vertical gaze, containing INC projections to the contralateral oculomotor nuclei and the opposite INC.Reference Bhidayasiri, Plant and Leigh 8 The clinical manifestations in our patient, specifically supranuclear vertical gaze palsy and incomplete convergence, suggest involvement of the bilateral rostral midbrain; however, this was not demonstrated by brain MRI. Similar results were found in a study including 22 patients diagnosed as Hu-associated brainstem encephalitis, which showed that although the brain MRI was normal in all patients, severe neurological dysfunction was usually present despite treatment of the underlying tumour and/or immunotherapy as in our case.Reference Saiz, Bruna, Stourac, Vigliani, Giometto and Grisold 2 This study includes only one case presenting supranuclear vertical gaze palsy; however, no tumour was found at autopsy.Reference Saiz, Bruna, Stourac, Vigliani, Giometto and Grisold 2 To our knowledge, this is the first report of anti-Hu antibody paraneoplastic encephalitis associated with SCLC presenting as supranuclear gaze palsy. Brain MRI in our case showed a hyperintense lesion at the right extreme capsule on fluid-attenuated inversion recovery images. Functional MRI studies and a case study summarizing ischemic stroke in right insular and adjacent white matter revealed that these areas are associated with attention in auditory stimulation and processes of encoding and recall in auditory–verbal memory.Reference Grasby, Frith, Friston, Simpson, Fletcher and Frackowiak 9 - Reference Manes, Paradiso, Springer, Lamberty and Robinson 11 The lesion in these areas could affect recall and attention in auditory–verbal memory as in our patient; however, the clinical manifestations had not changed despite the radiographic improvement. Our case emphasizes the importance of early diagnosis of anti-Hu paraneoplastic neurological syndrome and identification of the underlying tumour in cases presenting subacute supranuclear gaze palsy, even if no abnormalities are found in the brainstem on MRI.