In lateral medullary infarction (LMI), spontaneous nystagmus typically beats away from the lesion side with torsional and upbeat components (pseudo-vestibular nystagmus).Reference Morrow and Sharpe 1 - Reference Khan and Lueck 3 Hemi-seesaw or dissociated vertical-torsional nystagmus has rarely been reported in LMI,Reference Morrow and Sharpe 1 - Reference Khan and Lueck 3 and it has been ascribed to tone imbalance in the central otolithic or vertical semicircular canal pathways.Reference Morrow and Sharpe 1 - Reference Khan and Lueck 3 The purpose of the present report is to describe a patient with LMI in whom the initial contraversive horizontal-torsional nystagmus evolved into ipsiversive torsional-downbeat nystagmus in the presence of persistent ipsiversive ocular tilt reaction (OTR). This change in the pattern of spontaneous nystagmus suggests disinhibition of the vestibulo-ocular reflex (VOR) pathways in the lateral medulla. The hemi-seesaw nystagmus beating in the direction of the OTR contradicts the prior speculation that hemi-seesaw is compensatory for the OTR in our patient.

A 44-year-old woman with right LMI was referred for evaluation of oscillopsia and imbalance for 8 months (Figure 1). The oscillopsia was most severe during rightward gaze. She also reported intermittent diplopia and a feeling of tumbling due to upside-down reversal of vision, mostly in the morning. Previous medical records described severe vertigo and imbalance along with left-beating horizontal-torsional nystagmus, right Horner syndrome, and decreased pain and temperature sensation in the right face and left side of the body during the acute phase. Examination at the time of consultation 8 months later additionally showed rightward head tilt and right hypotropia of 5 prism diopters. The spontaneous nystagmus had been changed into ipsiversive torsional (the top poles of the eyes beating toward the right ear) and downbeat. While the intensity of torsional nystagmus was similar in both eyes, the downbeat nystagmus was greater in the hypotropic right eye (Figure 2A). The nystagmus increased without fixation and during rightward gaze. Horizontal head-shaking for 10 seconds induced vigorous right-beating nystagmus and leftward truncal pulsion (see Video). Ipsilesional saccades were hypermetric. Horizontal smooth pursuit was impaired to the right, and vertical smooth pursuit was intruded by nystagmus. Fundus photography showed rightward ocular torsion (Figure 2B, normal range = 0–12.6°; positive values indicate an excyclotorsion), even though the degrees varied due to continuous torsional nystagmus. However, the subjective visual vertical was within the normal range (2.8° with right-monocular viewing, 2.6° with left-monocular viewing, 1.4° with binocular viewing; normal range=–3.1°~–3.0°; positive values indicate rightward torsion from the patient’s perspective). The initial and follow-up magnetic resonance images (MRIs) at the time of consultation showed an infarction restricted to the caudal and middle portions of the right lateral medulla without interval changes (Figure 1). The oscillopsia, nystagmus, and imbalance persisted over the following two years without a response to gabapentin up to 2,700 mg per day. 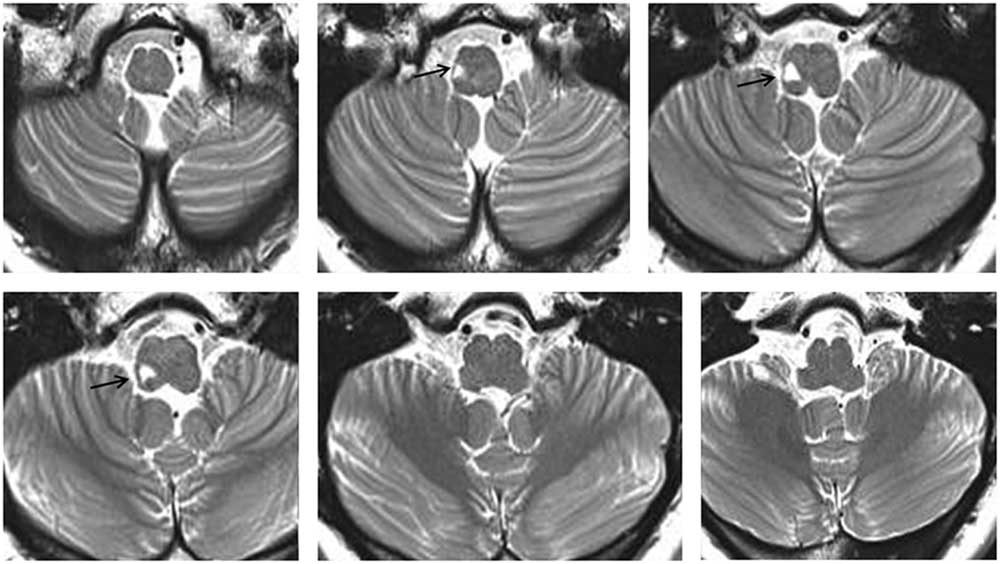 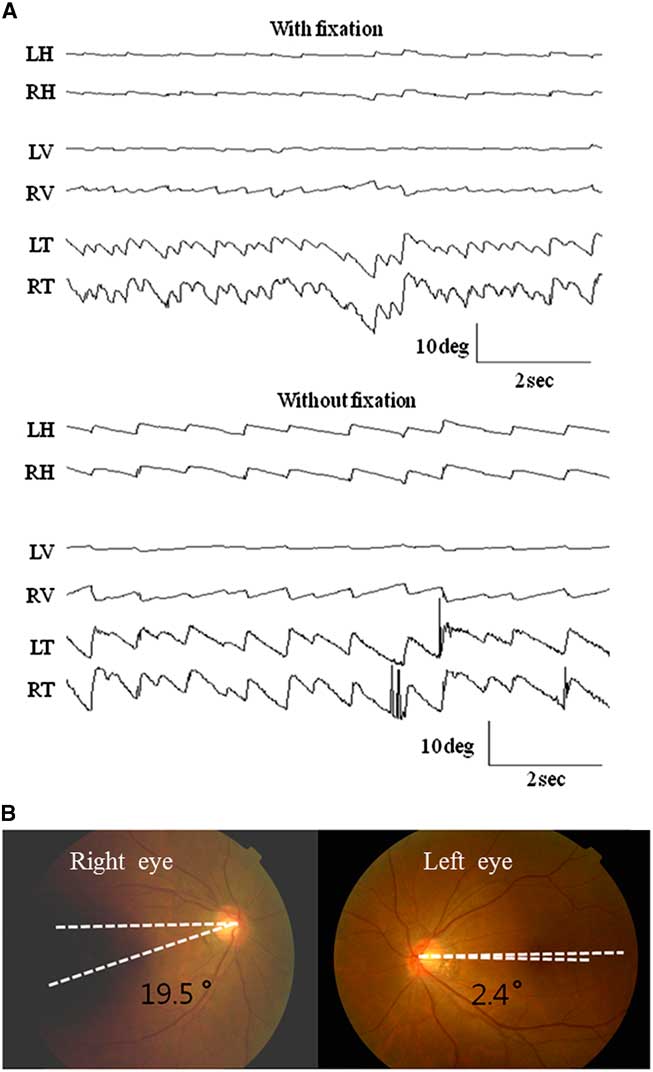 The evolution of spontaneous nystagmus in our patient may indicate a shift in the vestibular imbalances from initial disruption into late disinhibition and resultant excitation of the vestibulo-ocular reflex pathways. Excitation of the anterior semicircular canal (AC) induces the VOR in the upward and contraversive torsional directions by activating the ipsilateral superior rectus and contralateral inferior oblique muscles via the superior vestibular nucleus (SVN).Reference Ito, Nisimaru and Yamamoto 5 Since the flocculus and paraflocculus selectively inhibit the AC pathway, damage to these inhibitory fibres and resultant activation of the AC pathway would generate nystagmus beating downward and contraversive. The MRIs of our patient showed an infarction restricted to the caudal and middle portions of the right lateral medulla, sparing the rostral area harbouring the SVN. Accordingly, the late torsional-downbeat nystagmus may be explained by relative activation of the ipsilesional AC pathway from disinhibition, probably due to disruption of the inhibitory fibres from the cerebellum or contralateral vestibular nuclei. Repetitive stimulations of the SVN also primarily induced torsional-downbeat nystagmus in rabbits.Reference Ito, Nisimaru and Yamamoto 5 Otherwise, the torsional-downbeat nystagmus may be explained by a combination of torsional nystagmus from the lateral medullary lesionReference Morrow and Sharpe 1 and downbeat nystagmus from damage to the paramedian tract neurons.Reference Wagner, Lehnen and Glasauer 6

Another interesting finding in our patient is the persistence of the torsional-downbeat nystagmus for several years. Most patients with LMI show a resolution of the vestibular signs over the following weeks to months.Reference Morrow and Sharpe 1 - Reference Khan and Lueck 3 However, a previous study described persistent spontaneous nystagmus for more than two years in LMI.Reference Morrow and Sharpe 1 The nystagmus may last longer when lesions affect the vestibular nucleus rather than the labyrinth.Reference Leigh and Zee 7 Indeed, the signs from static vestibular imbalances such as spontaneous nystagmus and the OTR mostly resolve by three months after symptom onset in vestibular neuritis.Reference Choi, Oh, Kim, Koo, Cho and Kim 8 The change in the pattern of spontaneous nystagmus in our patient provides insight into the evolution of static vestibular imbalance in LMI.