Effects of Enterococcus sp. isolated from deep seawater on inhibition of allergic responses in mice

Most allergic diseases reflect an imbalance in lymphocyte-governed immunity, with immune responses to allergic molecules becoming overly biased toward T helper type 2 (Th2) cells. Secretion of cytokines such as IL-4, IL-5 and IL-13 by allergen-sensitised Th2 cells recruits granular effector cells such as eosinophils, basophils and mast cells to the site of allergic inflammation(Reference Djukanović, Wilson and Britten1–Reference Leung3). These effector cells, alone or in combination with cytophilic/reaginic IgE class antibodies, promote the clinical manifestations of allergy and atopy(Reference Durham4, Reference Wills-Karp5). In addition, IL-4 and IL-13 promote B lymphocyte immunoglobulin isotype switching to IgE(Reference Punnonen, Aversa and Cocks6), and serve to increase circulating levels of total and allergen-specific IgE(Reference Pene, Rousset and Briere7–Reference Brown and Hural10). Significantly, it has been well documented that lactic acid bacteria (LAB) have the potential to modulate and regulate the immune response.

We isolated Enterococcus sp. strain TN-3 from deep seawater in Toyama bay(Reference Hayashi, Shimada and Onaka19). Physiological characterisation of TN-3 showed it to cause liquefaction of gelatin, fermentation-congelation of litmus milk and to possess β-galactosidase activity. TN-3 was identified as E. faecium using the API20strep kit (bioMérieux, Craponne, France), but had high homology to E. durans in respect of 16S rDNA nucleotide sequences. In the present study, we examined the anti-allergic effect of viable and non-viable TN-3 on allergen-induced peritoneal eosinophil accumulation in mice. Moreover, dose–response relationships were evaluated regarding the effect of non-viable TN-3 on eosinophil accumulation, active cutaneous anaphylaxis (ACA) and serum IgE production in allergen-primed mice.

Preparation of viable and non-viable TN-3

Female BALB/c mice were purchased from Charles River Japan Inc. (Yokohama, Japan). The mice, aged 5 weeks, used for experiments were fed on a pellet diet (CE-2; Clea Japan Inc., Tokyo, Japan) and received tap water that had been filtered through a PF filer (Organo Co., Tokyo, Japan). All animals were housed in cages with a 12 h light–dark cycle. The temperature and humidity were controlled at 25·0 ± 1·0°C and 55·0 ± 5·0 %, respectively. The animal experimentation guidelines of our institute were followed. The experiments were performed in accordance with the guidelines for the care and use of experimental animals established by the Japanese Association for Laboratory Animals Science in 1987.

The second experiment was designed to determine the dose–response effect of non-viable TN-3 on anti-allergic properties. On day 0, the mice were divided into control (n 7), low-dose (n 7), medium-dose (n 7) and high-dose (n 7) groups. The mice of the low-dose, medium-dose and high-dose groups were administered doses of 15 mg, 30 mg and 60 mg non-viable TN-3 per mouse for 21 d, respectively. The mice of the control group were administered 0·5 ml saline per mouse per d for the same duration.

For challenge, the allergen extract (0·6 mg/ml) of 0·2 ml was injected intraperitoneally on day 20. After 24 h, mice were killed by carbon dioxide, and then peritoneal cells were collected with 4 ml PBS containing 1 % fetal calf serum and heparin (5 U/ml). The number of total leucocytes was counted with a haemocytometer under a microscope. A differential cell (eosinophils, neutrophils, monocytes and lymphocytes) count was carried out under a microscope after fixation and staining with May-Grunwald Giemsa dye. From these results, the proportion of eosinophils to total leucocytes was calculated.

Following intraperitoneal challenge by the allergen extract (0·6 mg/ml) on day 20, blood samples of mice were collected 24 h after challenge. Total IgE and allergen-specific IgE in sera were measured by a sandwich ELISA according to the method of Shimada et al. (Reference Shimada, Cheng and Yamasaki17). For measurement of total IgE, ninety-six-well plates for ELISA were coated with each isotype-specific anti-mouse immunoglobulin antibody (PharMingen, San Diego, CA, USA) by incubation overnight at 4°C, and then further treated with 10 % (v/v) fetal calf serum added in PBS for 4 h at room temperature to block any non-specific binding. Subsequently, the serial dilutions of mouse serum samples were incubated in the well for 1 h at room temperature. Purified mouse IgE (PharMingen) antibody was used as the standard. After being washed three times in PBS containing 0·05 % (v/v) Tween 20, biotin-conjugated rat anti-mouse IgE (PharMingen) antibody was added to the well, followed by the addition of streptavidin-peroxidase (Zymed Laboratories, San Francisco, CA, USA) for 1 h at room temperature. After washing six times, the plates were developed using a tetramethylbenzidine substrate solution. The reactions were terminated by the addition of 0·33 m-phosphoric acid. The plates were read in a microplate reader (MTP-300; Corona Inc., Ibaragi, Japan) at 450 nm and the concentration of IgE was calculated according to the standard curve.

For determination of the serum levels of allergen-specific IgE, samples with the 2− 2 and 2− 4 dilutions were placed on ELISA plates coated previously with cedar pollen allergen. The experimental procedure then proceeded with the methods as described above, and the antibody levels were expressed as the absorbance at 450 nm.

Following an intravenous injection of 0·05 ml Evans Blue (1 % (w/v); Sigma Chemical), ACA was elicited in the skin of the belly by the subcutaneous injection of 0·05 ml of cedar pollen allergen on day 21. At 30 min after the allergen challenge, mice were killed by carbon dioxide, and then a piece of skin shaved from each mouse was placed in 4·5 ml of mixture solution (1·5 ml sodium sulfate anhydrous (0·05 %, w/v) and 3·0 ml acetone). After vigorous shaking overnight, the absorbance of extravasated dye was measured colorimetrically at 620 nm.

The data are presented as the mean values and standard deviations. Statistical significance of the results was evaluated by Fisher's protected least significant difference (comparison between three groups) or the Bonferroni–Dunn test (comparison between four groups) using StatView software (SAS Institute, Inc., Cary, NC, USA). A value of P < 0·05 was considered significant. 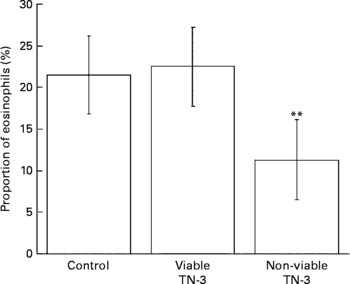 Fig. 1 Effect of oral administration of viable or non-viable TN-3 on eosinophil accumulation in allergen-primed BALB/c mice. The mice were divided into control, viable TN-3 and non-viable TN-3 groups. The mice of the control, viable TN-3 and non-viable TN-3 groups were administered saline, viable TN-3 or non-viable TN-3 for 21 d, respectively. The mice were sensitised and challenged with the purified allergen extract from Japanese cedar (Cryptomeria japonica) pollen. Peritoneal cells were collected 24 h after challenge. The number of total leucocytes and differential cells (eosinophils, neutrophils, monocytes and lymphocytes) was counted, and from these results, the proportion of eosinophils to total leucocytes was calculated. Values are means, with standard deviations represented by vertical bars. **Mean value was significantly different from that of the control group (P < 0·01).

Mice that had been administered low and high doses of non-viable TN-3 tended to have suppressed ACA compared with control mice (P = 0·107 and P = 0·055, respectively). On the other hand, no difference was observed in ACA between the medium-dose and control mice.

In the present study, we demonstrated that non-viable TN-3, rather than the viable form, was effective in suppressing eosinophil accumulation in allergen-primed mice. Studies of the immunomodulatory properties of dietary LAB have drawn the general conclusion that live bacteria are more effective at modulating immunity than their non-viable counterparts(Reference De Simone, Salvadori and Negri21). However, the pro-Th1 immunomodulatory Lactobacillus casei and L. plantarum have been shown to down-regulate allergic molecules in antigen-primed mice either by oral delivery in the viable form or systemic delivery in the heat-killed form(Reference Matsuzaki and Chin22–Reference Shida, Makino and Morishita26). Differences in immunomodulatory properties as a function of LAB viability may depend on species and strains.

The health effects of non-viable probiotics have been summarised by Ouwehand & Salminen(Reference Ouwehand and Salminen27). Thus it is clear that non-viable probiotics also have documented health effects. Some studies have also shown that effects on human health and well-being do not necessarily involve changes in the intestinal microflora or viability of the probiotic(Reference Ouwehand and Salminen27–Reference Saavedra29). These studies have indicated that viability is not necessary for all probiotic effects, but further studies comparing viable strains and products with non-viable strains are urgently needed. In addition, studies involving not only heat-killed or otherwise inactivated microbes have shown that even the cell wall components of some probiotic microbes may have significant effects on the health and well-being of host animals when incorporated into the diet(Reference Salminen and von Wright30).

The use of non-viable instead of viable micro-organisms would have economic advantages in terms of longer shelf-life and reduced requirements for refrigerated storage. Non-viable micro-organisms expand the potential use of probiotics to areas where strict handling conditions cannot be met, for example, in developing countries. Safety is an important requirement for probiotics and it is worth noting that non-viable or inactivated microbial preparations have very few, if any, adverse effects. While there is a possibility of adverse reactions to the protein components of such preparations, adverse reactions have not been reported for currently used probiotics (viable, non-viable or cell wall components)(Reference Salminen and von Wright30). Even though current probiotics are considered safe for food use(Reference Ouwehand and Salminen27, Reference Salminen, Ouwehand and Benno31), non-viable probiotics and microbial cell wall components are the least likely to cause safety concerns.

In the present study, non-viable TN-3 did not have the potential to inhibit eosinophil accumulation, IgE production and ACA in a dose-dependent manner at doses of 15, 30 and 60 mg. Interestingly, all three models of allergy gave the same results at the low and high doses, but not at the medium dose. Similarly, it has been reported that the effect of orally administered L. casei strain Shirota on total IgE production is not dose dependent(Reference Matsuzaki, Yamazaki and Hashimoto32). It has been suggested that the amount of non-viable TN-3 used in the present study might constitute the optimal dosage for maximal inhibition of allergic responses. Further research is needed to elucidate the detailed mechanisms whereby orally delivered TN-3 exerts its anti-allergic effects, including evaluation of the optimal dosage.

We would like to thank Dr Tamotsu Furumai of Toyama Prefectural University for the isolation of Enterococcus sp. strain TN-3. M. K., M. O., C. M. and T. S. carried out the animal experiments for this study. A. H. prepared the LAB used in the present study. T. E. and L. C. advised the expert approach in the present study.

There are no conflicts of interest.

* Views captured on Cambridge Core between September 2016 - 25th February 2021. This data will be updated every 24 hours.

Effects of Enterococcus sp. isolated from deep seawater on inhibition of allergic responses in mice
×

Effects of Enterococcus sp. isolated from deep seawater on inhibition of allergic responses in mice
×

Effects of Enterococcus sp. isolated from deep seawater on inhibition of allergic responses in mice
×
×