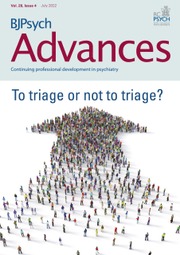 In this issue, (240–248) authors Mariana Pinto da Costa et al review the history of triage wards, their principles, the evidence for this model (e.g. length of in-patient stay, readmission rates, staff and patient satisfaction) and the development of assessment wards based on the triage model of care.