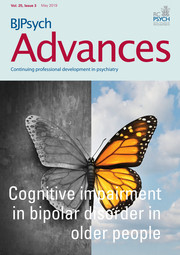 In this issue (pp 150–156), authors Judy Rubinsztein et al explain that bipolar disorder is less prevalent in older people but treating and managing it is challenging because of medical comorbidity. They review the cognitive problems observed in older people, explore why these are important and consider current treatment options. ©iStockphoto / wildpixel