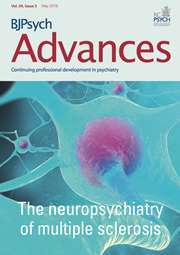 Multiple sclerosis (MS) is the most common neurological disease affecting young adults in the UK. It has a high psychiatric comorbidity and over half of patients have some degree of cognitive impairment that adds to the burden of disability. In this issue, Ron (pp. 178–187) reviews the psychiatric and cognitive manifestations of MS and their detection and treatment. ©iStockphoto/Rost-9D