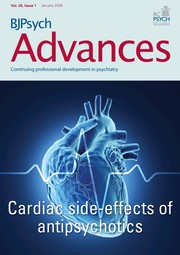 Second-generation antipsychotic medications (SGAs) have advanced the treatment of schizophrenia over the past 30 years. However, a number of potentially life-threatening cardiac side-effects associated with these treatments concern and can discourage prescribers from administering these evidence-based treatments. In this article (26–40), authors Sweeney et al provide a practical, psychiatrist-oriented understanding of the relative frequencies, mechanisms, investigations and treatments associated with these cardiac toxicities. They aim to highlight that these are relatively rare complications of an effective class of drug and to promote the advantages of early involvement of cardiologists in the psychiatric multidisciplinary team to guide the investigation and management of these conditions. ©iStockphoto/fruttipics