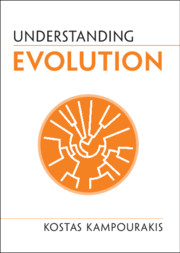 Why do the debates about evolution persist, despite the plentiful evidence for it? Breaking down the notion that public resistance to evolution is strictly due to its perceived conflict with religion, this concise book shows that evolution is in fact a counterintuitive idea that is difficult to understand. Kostas Kampourakis, an experienced science educator, takes an insightful, interdisciplinary approach, providing an introduction to evolutionary theory written with clarity and thoughtful reasoning. Topics discussed include evolution in the public sphere, evolution and religion, the conceptual obstacles to understanding evolution, the development of Darwin's theory, the most important evolutionary concepts, as well as evolution and the nature of science. Understanding Evolution presents evolutionary theory with a lucidity and vision that readers will quickly appreciate, and is intended for anyone wanting an accessible and concise guide to evolution.

'While other books explain what is wrong with the popular attacks on evolution - e.g. creationism, or Intelligent Design - this concise book addresses the fundamental question: why do people fail to accept evolution? This is like going deep to the causes of the illness, while others just try to lower the fever. Kampourakis argues convincingly that teleology, rather than theology, is the most important obstacle to understanding evolution. It is not just matter of science vs. religion. This welcome book is a long argument about the cultural and psychological roots of the widespread misunderstandings of evolution. It opposes scientism - the claim that evolution, or science in general, can bring an end to our questions, worries, and concerns; and, at the same time, it argues that evolutionary theory does not deprive our life of meaning.'

'A well-known philosopher of biology once wrote that evolutionary theory seems so simple that almost anyone can misunderstand it. In this heartfelt yet thoughtful book, Kostas Kampourakis essentially turns that sentiment on its head. The author’s words on philosophy and science may well lead readers to conclude that, although evolution can be counterintuitive and complex, almost anyone can understand it, with suitable reason and evidence. Kampourakis’ treatment should be especially enlightening for those who are wrestling with the acceptance of evolution as truth.'

John C. Avise - Distinguished Professor of Ecology and Evolution, University of California–Irvine, and author of Evolutionary Pathways in Nature: A Phylogenetic Approach.

'Understanding Evolution by Kostas Kampourakis deserves a wide readership. It is a sensitive introduction to evolutionary theory itself, as well as its public image and its philosophical implications. It shows the very great importance of the father of the subject, Charles Darwin; sets the disputes with religion in context; and suggests that the evidence is overwhelming but that no reader need feel threatened. It is fair and comprehensive, lively without being heavy-handed, and judicious in its judgments. Read it yourself, and get a copy for your family and your friends!'

Michael Ruse - Florida State University, and editor of The Cambridge Encyclopedia of Darwin and Evolutionary Thought

'… there are plenty of good books on evolution … So why another one? Because, argues Kampourakis, contra a widespread assumption among educators, the biological theory of evolution is actually counterintuitive, and, if not properly taught, it immediately runs into incomprehension and generates conceptual confusion … Scientific theories are dynamic, ever changing, perpetually incomplete and open to revision … The more the public at large understands this, the better off we will be, and books like Kampourakis' certainly make a valuable contribution to nudging us into that desirable direction.'

'In Understanding Evolution, Kostas Kampourakis provides not only a masterly exposition of the elements of evolution but also a compelling explanation of why the topic is so difficult to understand. Informed by up-to-date biology as well as by state-of-the-art historical, philosophical, and psychological scholarship, the book is a concise and considered treatment that deserves the attention of anybody interested in evolution.'

'This is, without a doubt, the best book available that deals with what is often referred to as a straightforward dichotomy of ‘science versus religion.’ Not so is the central message of this outstanding, well-written and organized treatment of the nature of evidence, of theory - especially evolutionary theory - of the ramifications of evolution throughout society, and, perhaps most importantly, of why it is so difficult for so many to accept the evidence for evolution. Aimed at a general audience, this book should be read by all who struggle with the logic and consequences of the theory of evolution.'

'‘How extremely stupid not to have thought of that!’, Huxley exclaimed, when he first learnt of evolution by natural selection. But Darwin’s great insight is not at all obvious - in many ways, it is rather counterintuitive. The odds of experiencing that ‘Aha!’ moment are vastly improved by teachers like Kostas Kampourakis. Always attentive to conceptual obstacles, Kampourakis helps the reader to grasp the core of evolutionary theory - from evo-devo to genetic drift - to show just how rich and exciting it is.'

'In Understanding Evolution, the science educator Kostas Kampourakis offers an accessible but sophisticated analysis of the topic, combining historical, scientific, philosophical, and psychological factors. Though not ignoring religious concerns, especially those related to design, he focuses instead on the numerous difficulties associated with understanding evolution. Specialists and dilettantes alike will learn much from this volume.'

Ronald L. Numbers - Hilldale Professor Emeritus of the History of Science and Medicine, University of Wisconsin–Madison

'Understanding Evolution is an outstanding resource for students, teachers, scientists, and journalists. It sets an impressive new standard for the field by integrating current findings from biology, psychology, and the philosophy of science. Using clear and compelling examples, Kampourakis uncovers the roots of our intuitions about the living world, and shatters widespread myths about why resistance to evolutionary ideas is prevalent. Readers will be rewarded with new tools for fostering scientific literacy, and fresh insights into one of the most profound biological ideas.'

'This volume addresses an important and timely issue - why does the concept of evolution encounter such resistance? - and provides a clear, original, and richly informative answer. Taking an interdisciplinary approach, the author reveals persistent conceptual obstacles that have broad implications for the nature of scientific understanding in the world today.'