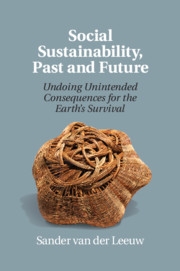 Social Sustainability, Past and Future
Undoing Unintended Consequences for the Earth's Survival
Buy print or eBook[Opens in a new window]

This book condenses some thirty years of working in archaeology, complex systems theory, sustainability, and the wider social sciences. It is therefore simply impossible to thank all those people who have contributed, directly or indirectly, to the ideas it presents. I will have to limit myself to the most salient ones, colleagues and friends in many countries and working on many disciplines.

I will begin with some close friends who are no longer among us, but from whom I have learned lots and lots, and with whom I have collaborated closely over many years in different parts of the world: Roel Brandt and Willem Willems in the Netherlands were there at the beginning; Serge Cleuziou and Jean-Luc Fiches not much later in France. I miss them very much.

Normally, one mentions one’s life-long wife, friend, and companion last in prefaces such as this, but I want to mention Anick Coudart next – she enabled me to do whatever I have been able to do over the last thirty years by always being there, always listening, supporting, helping, but also commenting, critiquing, and so much more. From my time in Holland, after my studies, I want to mention and thank in particular some of my PhD students in Amsterdam, such as Ineke Abbink, Roswitha Manning, Nico Roymans, Linda Therkorn, Frans Theuws, as well as colleagues there such as Jan-Albert Bakker, Anthonie Heidinga, Jan Slofstra, Bert Voorrips. In Leiden I worked closely with potter Jan Kalsbeek, and profited from the wide-ranging interests of Henri Claessen.

I came to Cambridge as a result of a long-standing relationship with UK archaeologists. From that British period, Robert Chapman, John Cherry, John Coles, Robert Foley, Colin Shell, Marie-Louise Sørensen, Robin Torrence, and Todd Whitelaw stand out in one way or another.

Then there are the many, many colleagues of the ARCHAEOMEDES project in the 1990s. Altogether we were a team of sixty-five people from eleven countries, and I cannot mention them all. But I owe a particular intellectual and social debt to Peter Allen, Geoff Bailey, Sarah Green, Mark Lemon, James McGlade, Laurent Olivier, Roger Seaton, Nick Winder in Britain, Françoise Audouze, François Favory, Jean-Jacques Girardot, Helene Mathian, Denise Pumain, Lena Sanders in France, Einar Holm, Sture Oberg in Sweden, Marina Picazo in Spain, Paola Filippucci in Italy. Together we created a unique project, a unique team, and a unique atmosphere.

During my time on the faculty of the University of Paris, I was received with open arms by another group of long-term friends, among whom Jean-Paul Demoule, Thierry Berthoud, and Alan Schnapp played, and still play, very important roles.

At the Santa Fe Institute (SFI), Henry Wright, Tim Kohler, and Geoffrey West introduced me to that community and opened new perspectives. Out of the collaboration with SFI colleagues emerged the ISCOM project, with particular contributions by Luis Bettencourt, Davide Ferrari, David Lane, Jose Lobo, Irene Poli, Denise Pumain (again!), Roberto Serra, Geoff West, and numerous others. I think back to those lovely meetings in Italy, especially on San Servolo in the lagoon of Venice, with great pleasure.

At Arizona State University (ASU), among the hundreds of colleagues with whom I worked in one capacity or another, I want to express my thanks first of all to Charles Redman who introduced me there, then to Jim Buizer, the friend who helped me navigate the institution successfully to create the School of Human Evolution and Social Change, as well as Dean Alan Artibise. Bill Kimbel, Ben Nelson, Keith Kintigh, and many others in the faculty supported me in making drastic changes in that School. Somewhat later I linked up with Gary Dirks, Chris Boone, and other faculty members at the Julie Wrigley Global Institute of Sustainability, and with Manfred Laubichler of the Global Biosocial Complexity Initiative.

In recent years, friends and colleagues in Japan, China, Germany, France, and Sweden have enriched me with different ways of thinking. Among those, I’d like to mention Kenichi Abe, Carl Folke, Zhangang Han, Carlo Jaeger, Hein Mallee, Daniel Niles, Ortwin Renn, Johan Rockström, Qian Ye, and Yongsheng Zhang. They have been a huge stimulus in writing this book.

I also want to acknowledge the support I have received in various stages of my trajectory from my “bosses”: Willem Glasbergen and Hans “Carlos” van Regteren Altena in Amsterdam, Colin Renfrew in Cambridge, and Michael Crow at ASU. Their patronage allowed me to go my way, protected me at difficult moments and, in one way or other showed their belief in me. That was a very important contribution.

Last of all, I owe a huge debt to those friends and colleagues who have read this manuscript, in whole or in part, and have enriched it by their critical examination from very different points of view: Vernon Scarborough, Gary Dirks, Yongsheng Zhang, and above all Thierry Berthoud, Alan AtKisson, and two anonymous reviewers.

I am immensely grateful to all these people for the many ways they have helped me throughout my life, and thus have contributed to the realization of the intellectual voyage that led to the pages you now have in front of you.

But I want also to express my deep gratitude to the institutions that have supported me during the writing of this book. First of all Arizona State University which granted me leave to work away for most of the spring and summer of 2016 and then gave me a full year’s sabbatical from August 2016 to August 2017. That first spring and summer of 2016 were spent at the Institut Méditerranéen de Recherches Avancées (IMÉRA) of Aix-Marseille University in France, where the staff not only housed us magnificently, with a view over the whole old city of Marseille, but created the ideal atmosphere in which to write and work in a relaxed and productive manner. I also owe much to colleagues at that University, in particular Joel Guiot, Wolfgang Cramer, Alan Kirman, and Daniel Contreras, who made sure we also had a pleasant social life and inspiring discussions at OT-Med, one of the very prestigious Laboratoires d’Excellence funded by the French central government.

After an intermezzo in Beijing and other parts of China, we took up residency among our old friends at the Research Institute for Humanity and Nature (RIHN) in Kyoto, Japan who very graciously (and exceptionally) granted us a second fellowship of four and a half months from September 2016 to mid-January 2017. Those who know RIHN and Kyoto will not be surprised that that was another ideal place to be writing, unconstrained by obligations, with interesting colleagues and a very effective and pleasant staff. Here, I particularly want to thank the Director-General, Tetsuzo Yasunari, his two Deputy DG’s, Jumpei Kubota and Makoto Taniguchi, and several of their many colleagues with whom we created strong bonds: Kenichi Abe, Junko Habu, Hein Mallee, Steven McGreevy, Hisei Nakanishi, Daniel Niles, and Tatsuyoshi Saijo. Moreover, RIHN graciously allowed me to organize two workshops during our stay, and we enjoyed some particularly instructive and pleasant trips with Kenichi Abe.

After a brief intermezzo at ASU we then moved to the Institute of Advanced Sustainability Studies in Potsdam, Germany, where our welcome was as wonderfully warm as in the first two places. Ortwin Renn, one of its directors, graciously mediated for me a two-year senior fellowship that strengthened contacts with a number of colleagues working in Berlin and Potsdam. Unfortunately, obligations at ASU did not allow me to profit from our stay at Potsdam for more than five months, but we came back in the fall of 2018. Apart from Ortwin, we found old friends there, in particular Ilan Chabay, Armin Haas, Carlo Jaeger, Falk Schmidt, and made new friendships with Mark Lawrence and Patrizia Nanz (the two other members of the directorate), Jörg Mayer-Ries, Tim Butler, Pia-Johanna Schweitzer, and others.

Our stay at these institutions enabled me to write unrestrained by appointments, meetings, and other obligations, and that meant I could write when I was really in the mood, and not squeezed between other events as I had been doing for a long time. In so far as this book is understandable, it is entirely due to the largesse of these institutions and the colleagues peopling them. Bliss!