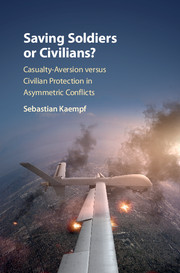 Concerns for the lives of soldiers and innocent civilians have come to underpin Western, and particularly American, warfare. Yet this new mode of conflict faces a dilemma: these two norms have opened new areas of vulnerability that have been systematically exploited by non-state adversaries. This strategic behaviour creates a trade-off, forcing decision-makers to have to choose between saving soldiers and civilians in target states. Sebastian Kaempf examines the origin and nature of this dilemma, and in a detailed analysis of the US conflicts in Somalia, Afghanistan and Iraq, investigates the ways the US has responded, assessing the legal, moral, and strategic consequences. Scholars and students of military and strategic studies, international relations and peace and conflict studies will be interested to read Kaempf's analysis of whether the US or its adversaries have succeeded in responding to this central dilemma of contemporary warfare.

‘A key normative tension lies at the heart of the contemporary American way of war, caused by the political imperative to avoid own force casualties and the legal requirement to avoid killing civilians. As Kaempf shows, this has created significant problems for US military operations – problems that, however irresolvable, need to be acknowledged. This excellent book makes an important contribution to our understanding of the conduct of modern warfare.'

‘This is a sophisticated study of the tension between two guiding norms of US military strategy: to limit casualties among US armed forces and to protect civilians from disproportionate harm. Developing insights of theorists ranging from Clausewitz to Walzer, the author reveals how asymmetric conflicts bring this tension to the fore, when weaker adversaries deliberately seek to provoke the US side to violate one or both of the norms. Well-chosen case studies exhibit an impressive mix of empirical, normative, and legal analysis.'

'Kaempf makes it easy for the reader to navigate among the wealth of empirical information and writings from political science, international law, political theory, and history.'

‘This is one of the most important books about modern war in decades. Masterfully argued and meticulously researched, the book introduces a paradox: that international humanitarian law (IHL) requires militaries, rightfully, to avoid civilian harm, yet goes silent on how to reduce the risk of soldiers’ lives to ensure such civilian protection.’

‘Saving Soldiers or Civilians? makes a very important contribution to our understandings of U.S. military policy, civilian casualties, and the dilemmas inherent in trying to follow the laws of armed conflict while simultaneously seeking to maximize military advantage. Kaempf’s explanations are clear and plausible, and they must be taken seriously.’