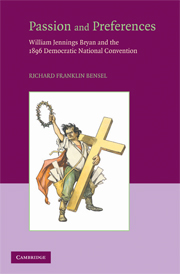 The 1896 Democratic National Convention simultaneously proposed a radically new trajectory for American industrial expansion, harshly repudiated its own incumbent president, and rudely overturned the party's traditional regional and social hierarchy. The passion that attended these decisions was deeply embedded in the traditional alliances and understandings of the past, in the careers and futures of the party's most prominent leaders and most insignificant ward heelers, and in the personal relations of men who had long served together in the halls of Congress. This passion was continuously on display in the Chicago Coliseum, shaped by the rhythm of parliamentary ritual and the physical architecture of the convention hall. William Jennings Bryan anticipated the moment when pathos would be at its height and chose that moment to give his 'Cross of Gold' address, thus harnessing passion to his personal ambition and winning the presidential nomination.

“Bensel shows the interplay of party factions in a convention whose nominee was hardly a foregone conclusion, the ways in which newspapers reported and shaped events, the role of architecture and physical space in channeling the passions aroused, and, ultimately, ‘the speech’ itself as both calculated intervention and ignition for a spontaneous convergence of passions that produced the unexpected outcome. One can only hope that down the road the Obama campaign and its 2008 Denver convention will benefit from a similarly revealing microanalysis.”
Shelton Stromquist, American Historical Review

“It would be difficult to imagine a book that immerses readers more fully in the setting and experiences of that tumultuous political convention. Bensel captures the atmosphere of the convention sites, ranging from the streets and hotels to the massive New Chicago Coliseum…Because most of the delegates had never before attended a political convention, the moment perhaps ‘was like a baptism during a church revival, a profound experience’ (p. 157)…Against that backdrop, Bryan's famous speech was disruptive, unleashing, passions, challenging ritual formalities and transferring control of the convention (and, ultimately, the presidential nomination) from the party leaders to himself.”
LeRoy Ashby, Journal of American History

“In the summer of 1896, Democrats converged on Chicago for their national convention where they adopted a platform calling for the monetarization of silver and nominated William Jennings Bryan for the presidency. These contests over platform and candidate exemplified two strikingly different modes of decision-making, one predictably shaped by pre-existing preferences, the other fueled by interaction and emotion that generated unanticipated choices within a well-understood ritual order. In Passion and Preferences, Richard Bensel elegantly dissects these entwined processes of collective action, excavating the sources of a dramatic turning-point in American political history and forcefully challenging basic assumptions of political theory. The result is a virtuoso analysis of the interplay of ritual, strategy and emotion in the eventfulness of political development.”
Elisabeth S. Clemens, author of The People’s Lobby: Organizational Innovation and the Rise of Interest Group Politics in the United States, 1890-1925

“This splendid book explains why ‘The Cross of Gold’ speech was so effective by illuminating the world of doctrine and theatrics that mass parties created during the Gilded Age. Giving passionate attention to both historical detail and context, Richard Bensel serves up one of the most insightful studies of a pivotal moment in politics that I have ever read.”
Michael Kazin, author of A Godly Hero: The Life of William Jennings Bryan

“A masterful analysis of a critical moment in American political development: the Democratic Party’s embrace of free silver, populism, and William Jennings Bryan. Bensel’s compelling narrative is full of rich insights into the interplay of passion, structure, and ritual in politics.”
Eric Schickler, University of California at Berkeley

"[A] detailed, and highly readable, narrative and analysis of the convention."
The Review of Politics, Robert W. Cherny