The Memory Arts in Renaissance England 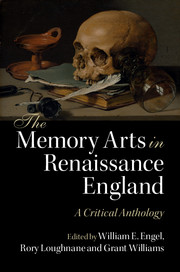 This is the first critical anthology of writings about memory in Renaissance England. Drawing together excerpts from more than seventy writers, poets, physicians, philosophers and preachers, and with over twenty illustrations, the anthology offers the reader a guided exploration of the arts of memory. The introduction outlines the context for the tradition of the memory arts from classical times to the Renaissance and is followed by extracts from writers on the art of memory in general, then by thematically arranged sections on rhetoric and poetry, education and science, history and philosophy, religion, and literature, featuring texts from canonical, non-canonical and little-known sources. Each excerpt is supported with notes about the author and about the text's relationship to the memory arts, and includes suggestions for further reading. The book will appeal to students of the memory arts, Renaissance literature, the history of ideas, book history and art history.

‘This admirable anthology of vernacular sources is far more than a compilation of technical treatises on the ‘art of memory’, but is rather a bold, interdisciplinary attempt to suggest the complexity of what the authors call ‘English mnemonic culture’. Stretching from early sixteenth-century humanism to the Royal Society, this collection traces the ‘mnemonic episteme’ through works of literature, poetics, rhetoric, philosophy, medicine, history, religion, and the visual arts. From emblems to architecture, poetry to universal language projects, The Memory Arts in Renaissance England shows that the culture of early modern England was profoundly shaped by memory and mnemonic practices.’

‘Introductory students and advanced scholars alike will be grateful for this judicious yet capacious anthology - a veritable ‘treasure-house of the mind’.’

'The Memory Arts in Renaissance England represents a great leap forward for early modern memory studies, and is an invaluable resource for scholars and students of memory and mnemonics across fields and periods. What Engel, Loughnane, and Williams convey in their superb introduction and throughout this comprehensive collection is the range and possibility of the memory arts, which includes rhetoric and poetics, education and science, history and philosophy, religion and devotion, and all genres of literature. This important and timely anthology provides the most complete picture of the Renaissance memory arts to date, and thus makes a significant contribution to the evolving and interdisciplinary field of memory studies.'

'The anthology thus provides new contexts for reading and teaching major authors, while also demonstrating the extraordinary depth and range of the early modern memory arts.'

'The Memory Arts in Renaissance England: A Critical Anthology, edited by William E. Engel, Rory Loughnane, and Grant Williams offers a resource ideally suited for classroom use. Following the splendid introductory essay, the volume's intelligent selection of excerpts covers a wide range of materials, from memory arts and rhetorical manuals to treatments of memory in diverse genres, including teaching manuals, historical and political treatises, and literary works.'

'The Memory Arts in Renaissance England [is a] wonderful compendium of excerpted texts ranging over two centuries, from 1509 to 1697. Its distinguished editors - William E. Engel, Rory Loughnane, and Grant Williams - have divided the collection thematically. … Each part and excerpt comes with a helpful introduction, as does the volume as a whole. … The book does an excellent job imparting the visual literacies involved in mnemonics, thereby improving us as readers of images. … The collection more than fulfills its aim of surveying enough texts related to memory to provide a starting point for further research on the topic. … To all the memory experts and aficionados out there, this book is one to own and keep nearby.'

'The Memory Arts in Renaissance England is the first anthology of vernacular sources concerned with memory and the mnemonic arts in the English Renaissance, and it makes a valuable contribution toward conceptualizing the cultural role played by memory in the sixteenth and seventeenth centuries … The collection is so wide-ranging and authoritative it can serve as an important reference for specialists in rhetorical theory or memory studies, yet the anthology's introductions and notes render it assessable enough to assign in a graduate seminar. The Memory Arts in Renaissance England should provide access points into critical conversations for both scholars and students for decades to come.'