Home
Decolonisation and the Pacific

Decolonisation and the Pacific

Indigenous Globalisation and the Ends of Empire 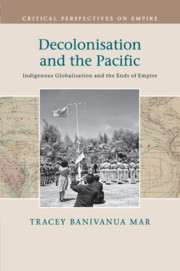 This book charts the previously untold story of decolonisation in the oceanic world of the Pacific, Australia and New Zealand, presenting it both as an indigenous and an international phenomenon. Tracey Banivanua Mar reveals how the inherent limits of decolonisation were laid bare by the historical peculiarities of colonialism in the region, and demonstrates the way imperial powers conceived of decolonisation as a new form of imperialism. She shows how Indigenous peoples responded to these limits by developing rich intellectual, political and cultural networks transcending colonial and national borders, with localised traditions of protest and dialogue connected to the global ferment of the twentieth century. The individual stories told here shed new light on the forces that shaped twentieth-century global history, and reconfigure the history of decolonisation, presenting it not as an historic event, but as a fragile, contingent and ongoing process continuing well into the postcolonial era.

‘This is an arresting and important work - one whose time has come. In a boldly reimagined history of Pacific decolonisation as a struggle over not only territories, but bodies, minds, and cultures, Tracey Banivanua Mar shows us how Oceanic peoples engaged with a world-wide political consciousness, committed to asserting their own histories and futures. Through a deeply researched array of sources and characters, she illuminates the ways that local struggles for self-determination were also contests for global change.’

‘Several generations of Pacific historians have produced fine studies of colonial experience, from the eighteenth century through to the early twentieth. No one has previously attempted what this outstanding book delivers: an absorbing comparative account of the succeeding chapters in the history of the Pacific; in particular, the heterogeneous story of empire's still-incomplete undoing. Drawing together engaging micro-histories and incisive analyses of broader patterns, Banivanua Mar's Decolonisation and the Pacific helps reinvent Pacific history.’

‘At last a history of decolonisation in the Pacific from an Indigenous perspective that makes us rethink conventional understandings of the process of decolonisation itself: what it is, should be and was. With a focus on peoples, rather than territories or nation-states, this brilliant study takes us beyond the 'imperial turn' to focus on the Oceanic networks forged by colonised peoples in the context of global liberation struggles. Creatively imagined and beautifully written, this landmark work will transform our understanding of colonialism and decolonising movements in the Pacific world.’

‘Tracey Banivanua Mar has delivered a rich, meticulously researched and engaging read examining the little-known history of decolonisation in the Pacific. This publication delivers Indigenous groups across the Pacific from the historical binds of colonialism as resourceful innovators pushing social and political ideas that challenged the powers that be.’

‘This is an entirely new, rich and provocative rendition of what decolonisation means, the respects in which it is ongoing, and how it has been shaped. Beginning and ending with the struggle against nuclear testing in the Pacific, Banivanua Mar alerts us to diasporic Indigenous peoples' utilisation of trans-Oceanic networks to contest and undo colonialism across a large swathe of the Earth's surface.'

'In this ambitious and exciting book, Tracey Banivanua Mar manages not only to recover the histories of those she calls ‘decolonisation's forgotten people’, but in so doing, to reshape how we think about decolonisation itself. Banivanua Mar shows that decolonisation for the indigenous inhabitants of the Pacific was a struggle that transcended the nation-state, assuming a transnational thrust that sought liberation in culture and consciousness no less than in politics and power.'

'In this painstakingly researched and deeply principled history, Tracey Banivanua Mar shows us how and why we need to reposition decolonisation narratives to account for the time and space of the Pacific.'

'Banivanua Mar has produced a powerfully written and exciting thesis that claims a long and vivid history of distinct and innovative forms of resistance and decolonisation across Oceania.'

'It is a landmark study that we should enthusiastically endorse and recommend. Let me be one of the first native scholars to thank her for producing such a wonderful example of Pacific history.'

‘Driven by her own ethics, clearly inﬂuenced by postcolonial and feminist politics, Tracey brought people and their principles to the centre of the book …'

'This is a brave book, considering its expansive time frame and geographic scope, but it is intellectually sophisticated, coherently reasoned, and superbly researched.'

'… this thoughtful book advances new and persuasive ideas about the history of Australasia and Oceania, and about decolonisation which are sure to inspire further discussion.'

‘The book is beautifully written. Chapter titles include words like currents and churn, saltwater and flight and reflect the oceanic geography essential to the book. Story is artfully deployed, creating interest as new chapters begin, yet skilfully opening lines of analysis.’