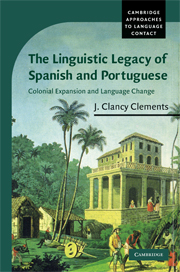 In this volume, I have appealed to a usage-based model of grammar based on Emergent Grammar and the evolutionary model of language change (Croft 2000; Mufwene 2001) to help us understand the make-up of an array of contact language varieties involving Portuguese and/or Spanish. I started with the assumption that in an incipient pidgin, as well as in a full-fledged language, grammar develops in discourse. I have assumed, and in some cases demonstrated, that the frequency of use of linguistic features, both lexical and structural, is crucial to the development of a linguistic system. I have also assumed that the notion of speech community is key for understanding how language varieties become defined.

From an evolutionary perspective, the analogy of a language as a species allows us to view it as consisting of lexical and structural features (the analogues of genes in biology) and sets of such features (called a feature pool) that are used to encode human communication (communicative intercourse) within speech communities (a group routinely engaged in communicative intercourse in a given language). In these terms, the definition of what a language is becomes one based on the behaviour of individual human beings in a group rather than on any set of abstract linguistic traits. Thus, although the varieties spoken in Portugal and Brazil are quite different on various levels of grammar, both are considered varieties of Portuguese due to the close socio-political and cultural connections on many levels between the two countries.

Given that the emergence of contact language varieties involves language acquisition, both first and second, it is constrained by different types of bootstrapping (Bates and Goodman 1999) as well as by hypotheses such as the Primacy of Aspect Hypothesis and the Distribution Bias Hypothesis (Andersen 1983; Andersen and Shirai 1996).