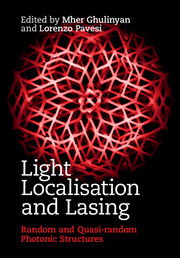 2 - Transport of localized waves via modes and channels

Suppressed transport and enhanced fluctuations of conductance and transmission are prominent features of random mesoscopic systems in which the wave is temporally coherent within the sample [6, 9, 501, 525]. The associated breakdowns of particle diffusion and of self-averaging of flux were first considered in the context of electronic conduction and for many years thought to be exclusively quantum phenomena [1, 2, 9, 11, 12, 113, 114, 476, 477, 525]. Independently, however, wave localization was demonstrated theoretically for a statistically inhomogeneous waveguide [156]. Over time, it became increasingly apparent that localization and mesoscopic fluctuations reflected general wave properties and might therefore be observed for classical waves as well [7, 22, 54, 78, 106, 130, 144, 145, 154, 156, 175, 221, 223, 225, 241, 263, 326, 353, 419, 462, 466, 487, 488, 501, 531, 535, 543]. In particular, the level and transmission eigenchannel descriptions proposed, respectively, by Thouless [476, 477] and Dorokhov [113, 114] to describe the scaling of conductance in electronic wires at zero temperature, are essentially wave descriptions involving the character of quasi-normal modes of excitation with in the sample and speckle patterns of the incident and transmitted field. Quasi-normal modes, which we will refer to as modes, are resonances of an open system. These modes decay at a constant rate due to the combined effects of leakage from the sample and dissipative processes. Eigenchannels of the transmission matrix, are obtained by finding the singular values of the field transmission matrix and they represent linked field speckle patterns at the input and output of the sample surfaces. Eigenchannels are linear combinations of phase coherent channels impinging upon and emerging from the sample. Examples of such channels may be propagating transverse modes of an empty waveguide, or transverse momentum states in the leads attached to a resistor. In measurements, input and output channels are often combinations of source and detectors at positions on the incident and output planes, respectively. Whereas modes are biorthogonal field speckle patterns over the volume of the sample [87, 293], eigenchannels are biorthogonal field speckle patterns at the input and output planes of the sample.