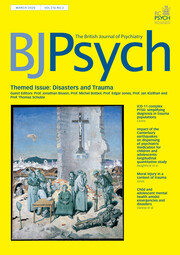 The Mad Woman of Douai by William Orpen

Between 1918 and 1919 Orpen executed a number of allegorical paintings, each distilling his revulsion at the effect of the war on human behaviour. The painting was inspired by his encounter with a victim of rape by retreating German soldiers. Orpen's earlier Somme landscapes serve as the stage for a hideous theatre of the absurd. The war is presented as a night nightmare world in which normal human pity and restraint are absent, captured by the grotesque curiosity of the peasants who crowd around the woman, while the soldiers appear indifferent. The crucifix on the ruined church wall seems like a clear reproof to a God who is powerless in the face of human bestiality.