DOUBTING CHRISTIANITY: THE CHURCH AND DOUBT 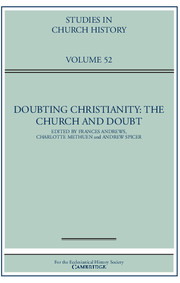