INSPIRATION AND INSTITUTION IN CHRISTIAN HISTORY 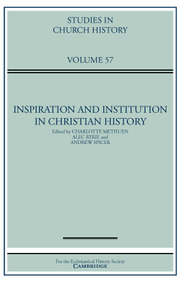