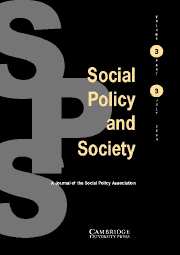 Themed Section on Globalisation and Welfare Systems in Asia