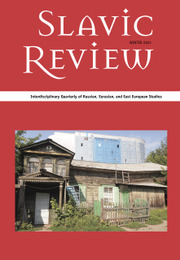 Critical Discussion Forum: Crisis, Contingency, and the Future of REEES—Perspectives on the Present and Future of the Field