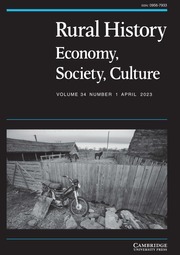 In the nineteenth century, the old county of Montgomeryshire in Wales was mainly rural, with some industrialised towns. This article looks at the most prevalent crime dealt with in the county's Quarter Sessions, namely theft, and considers the gendered nature of law breaking. In particular it investigates the rural and urban landscapes and how they affected offenders’ activities and draws conclusions on the implications for policing.

6. The county receives scant attention in David Jones's classic work, Crime in Nineteenth-Century Wales, (note 5) and even less attention in Jones’ essay on the experiences of the plebeian Welsh, ‘The Welsh and Crime: 1801–1891’, in Emsley, C. and Walvin, J., eds, Artisans, Peasants and Proletarians, 1760–1860 (Beckenham, 1983), pp. 81–103 Google Scholar. In Jones’ book, Crime, Protest, Community and Police in Nineteenth-Century Britain (Boston, 1982), the Welsh dimension concentrates on industrialised Merthyr Tydfil in the south. Jones does, however, use 300 cases from early 1860s Montgomeryshire for a paper presented to Llafur, the Welsh People's History Society, which studies history from below. In this, he concentrates on rural offences, mainly arson, poaching and vagrancy, with a decided leaning towards men's experience of crime, see Jones, D. J. V., ‘Crime, Protest and Community in Nineteenth-century Wales’, Llafur, 3 (1974), 110–20Google Scholar. Melvin Humphreys devotes a chapter to the subject of crime in Montgomeryshire in The Crisis of Community (Cardiff, 1996), pp. 217–52, although his focus is on the eighteenth century. Nicholas Woodward considers the county in his studies of rural crime and infanticide from the early eighteenth to early nineteenth centuries. See Woodward, N., ‘Burglary in Wales, 1730–1830: Evidence from Great Sessions’, Welsh History Review, 24 (2008), 60–91 Google Scholar; Woodward, N., ‘Horse Stealing in Wales, 1730–1830’, Agricultural History Review, 57 (2009), 70–108 Google Scholar; Woodward, N., ‘Seasonality and Sheep Stealing in Wales, 1730–1830’, Agricultural History Review, 56 (2008), 23–47 Google Scholar; Woodward, N., ‘Infanticide in Wales, 1730–1830’, Welsh History Review, 23 (2007), 94–125 Google Scholar. Carl Griffin has analysed the protest aspect of rural crime in Griffin, C., Protest, Politics and Work in Rural England, 1700–1850 (Basingstoke, 2014)Google Scholar.

8. See discussions on the link between culture and environment in Short, B., ‘Conservation, Class and Custom: Lifespace and Conflict in a Nineteenth-century Forest Environment’, Rural History, 10 (1999), 127–54Google Scholar; Short, B., ‘Environmental Politics, Custom and Personal Testimony: Memory and Lifespace on the late Victorian Ashdown Forest, Sussex’, Journal of Historical Geography, 30 (2004), 470–95Google Scholar. King, Peter has identified the spatial dimension of crime as being neglected in his ‘The Impact of Urbanization on Murder Rates and on the Geography of Homicide in England and Wales, 1780–1850’, Historical Journal, 53 (2010), 671 Google Scholar.

14. Thomas Plint (1851) quoted in Emsley, Crime and Society in England, p. 114. The railways provided access to criminal opportunities and a quick getaway. See Ireland, R., ‘An Increasing Mass of Heathens in the Bosom of a Christian Land: The Railway and Crime in the Nineteenth Century’, Continuity and Change, 12 (1997), 55–78 CrossRefGoogle Scholar for a discussion on railway crime and increased mobility.

19. ‘Other’ includes items such as animal bedding, coal and umbrellas.

21. In cases where the defendant pleaded guilty, no trial followed and therefore the exact location of the offence is unclear. The data for Figure 7.8 is from the forty-nine cases where the woman pleaded not guilty thus a trial ensued and more details were given.

23. Newtown and Welshpool Express, 5th July 1870. The present study found allegations of sexual assault in the workplace, private homes, on the street and in isolated areas. The lone woman was clearly vulnerable in any place. Louise Jackson briefly discusses the relation of social space and sexual assault in Jackson, L. A., ‘Women Professionals and the Regulation of Violence in Interwar Britain’, in D'Cruze, S., Everyday Violence in Britain, 1850–1950: Gender and Class (Harlow, 2000), pp. 119–35Google Scholar, pp. 128–30. D'Cruze herself devotes a section to space in Crimes of Outrage: Sex, Violence and Victorian Working Women (London, 1998), pp. 30–36.

33. Toplis, A., ‘A Stolen Garment or a Reasonable Purchase? The Male Consumer and the Illicit Second-hand Clothing Market in the First Half of the Nineteenth Century’, in Stobart, J. and Van Damme, I., eds, Modernity and the Second-Hand Trade: European Consumption Cultures and Practices, 1700–1900 (Basingstoke, 2011), pp. 59–60 Google Scholar.

59. See Zedner, Women, Crime and Custody, p. 25 where she argues that women's mobility was restricted by confinement to home.

60. For discussions of the handicaps imposed by menstruation see Strange, J.-M., ‘The Assault on Ignorance: Teaching Menstrual Etiquette in England, c. 1920s to 1960s’, Social History of Medicine, 14 (2001), 247–8Google Scholar. Advice given to women was that they should ‘avoid sudden exposure to cold or wet and avoid mental agitation’ during menstruation, see Showalter, E. and Showalter, E., ‘Victorian Women and Menstruation’, in Vicinus, M., Suffer and be Still (Indiana, 1973), p. 39 Google Scholar. See Jane Thomas's theft of six waistcoats, Newtown and Welshpool Express, 21st October 1873.

62. For this analysis, a populated area was one where people were likely to congregate, such as towns and villages, while isolated areas are country lanes, fields away from habitation, farms with few or no near neighbours, etc.

70. They were being held at Dale Street in the city. Old maps show the police courts, bridewell and detective department situated there.

72. Nason's and Vaughan's cases were both heard at the Easter 1869 Sessions, Newtown and Welshpool Express, 10th March 1869.

78. Even in trousers the two sailors were captured during their attempted getaway across the hillside. It would have been easier for them to make their way west, across the flood plain. Witness testimony, however, reveals that labourers were working in that area, and the sailors tried to avoid them. Note Nicholas Blomley's analysis of the environment in Blomley, N., ‘Making Private Property: Enclosure, Common Right and the Work of Hedges’, Rural History, 18: 1 (2007), 1–21 CrossRefGoogle Scholar.