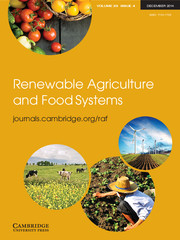 Global agriculture has faced unprecedented changes over the past 50 years. Initially, the needs of a world population that had doubled to over 6 billion were met by two to threefold increases in global food production through ‘green revolution’ agriculture, development of high yielding plant varieties, improved irrigation and crop management practices, and increased use of fossil-fuel based fertilizers and pesticides. Although food availability is no longer a problem in industrialized countries, food insecurity and persistent poverty still plagues one-half of Earth's people.

Recent United Nations reports estimate that some 840 million people on Earth are hungry and close to 3 billion live on less than the equivalent of $2 (2 Euro) a day1, 2, 3. The 2002 (1996) World Food Summit goal of halving the world's hungry by 2015 seems unlikely without a change in current food production and distribution systems4. Aside from meeting the continued requirement for increased food production, agriculture is now challenged: to improve health and social well being of people (better nutrition for the poor and balanced nutrition for the rich), reduce dependence on fossil fuels, adapt to climate change and extreme weather, reduce environmental degradation and decline in the quality of soil, water, air and land resources all while relying on fewer farmers (<1% of the population in USA) in increasingly urbanized societies throughout the world. These more recent challenges have led increasing numbers of people to realize that our current systems of agricultural production are not working as effectively as they have in the past. We need an agricultural paradigm that relies more on biology, ecology and sociology, than on the primarily one-dimensional physical and chemical management approaches of the past. Agriculture systems are needed which utilize food production and distribution systems that rely less on non-renewable, petrochemical resources, and more on renewable resources from the sun for food, feed, fiber and energy. We must meet global food needs based on the soil, water, land, and fertility resources that are readily available at present without compromising the capacity of future generations in meeting their food, environmental, and resource needs. Whether these needs can be met by ‘organic’ agriculture is unknown and is the lively topic of debate in the Forum discussion on ‘Can Organic Agriculture Feed the World’ of this special issue of Renewable Agriculture and Food Systems (RAFS) on ‘Meeting Food and Resource Needs’.

In response to the Forum discussion, Dr Fred Magdoff, author of the paper on ‘Ecological Agriculture’ in this issue of RAFS, notes that comparatively little organic systems research has been done and the best ways to customize organic production practices are not really known yet. Scientifically, this research is still in its infancy. ‘In fact, some of the “organic systems” that I've seen in experiments were not all that customized to the individual site, not run by organic farmers, but rather just using a standard combination of “organic” practices’. Taking an ecological approach may or may not be organic, although most approach organic by taking a preventive (problem prevention) approach to soil, crop, and animal management. As pointed out by Magdoff the key issue is that through our understanding of basic ecological principles, practices can be developed to provide high productivity, have minimal adverse environmental effects, and eliminate or decrease most pest problems. In the developing world (especially Africa), where nitrogen fertilizers are VERY expensive, the use of legumes, animal manures, leaves, etc. to help ‘prevent’ or lessen nitrogen deficiency is a very important issue—organic or not!!!! The use of local nutrient sources also provides organic matter to the soils, thus improving their biological and physical properties as well as chemical properties. It is easier to have an ecologically sound system when it is based on mixed crop and animal systems. Animal/crop systems provide many advantages over monoculture crop systems. For example, when ruminants are part of the system there is a direct economic use for a legume cover or forage crop, while still getting the nitrogen advantage of the legume, but some comes via the manure instead of directly from the plant. The real issue is to do the best job one can in managing above and below ground habitats to maximize the chances of getting healthy crops and minimize the chances that pests will be a major issue (by stressing pests and enhancing beneficial species). As pointed out in the Forum article by Badgley and Perfecto, the Cuban Food System was able to maintain a sustainable food system based on agroecological principles when large-scale use of fertilizers and pesticides was no longer possible after 1990.

Fred Kirschenmann, Resources Review Editor for RAFS, notes that any discussion on ‘feeding the world’ should include the new circumstances in which that feeding is done—namely, the end of cheap energy, more unstable climates (due to climate change), and much less available water. It is now generally conceded that we have either reached peak oil or will reach it by 2010, that climate change is already here for farmers, and numerous studies have pointed out that we are drawing down our ground water due to agricultural irrigation at rates that are not sustainable—especially in China and India where 60–70% of grain production is dependent on irrigation. Research in the Philippines has indicated that rice yields are already adversely affected because of higher night temperatures causing greater night-time respiration. These new realities will especially impact high-input monocultures since they depend on fossil fuel inputs for fertilizer, pesticides, and irrigation, and since highly specialized monocultures require relatively stable climates—when you have 92% of cultivated acres in corn and soybeans, as we do in Iowa (USA), then you need a climate that is consistently favorable to those two crops—which we are not likely to have in our new climate future. It is also questionable whether we can maintain our highly centralized global food system, with food traveling thousands of miles from field to table, in our new energy future; our future food system will have to be decentralized. Anyone thinking that we will be able to make an easy transition from our fossil fuel dependent era to an era of renewable energy is simply not paying attention to the energy efficiency ratios. For all of the industrial era we have been relying on cheap ‘stored’ energy which has accumulated in the earth over millions of years. We have now essentially tapped out that resource and will have to learn to live with ‘current’ energy and none of it will be as cheap as stored fossil fuel energy. So farming systems based on biological synergies, rather than energy inputs, will have the comparative advantage in our new futureReference Kirschenmann5. So, well-managed, ecologically based organic farms may have an advantage in our new world over the much more energy intensive conventional systems, but, whether we will be able to feed a world of 10 billion people with either system in our new energy/climate/water future cannot be predicted with any certainty.

This special issue of RAFS on ‘Meeting Food and Resource Needs’ has furthered the Journal's goal in providing a forum where conventional agriculturalists, striving toward more sustainable systems can interact with others in organic, biological, and biointensive agriculture to develop an agriculture that will achieve the vision of ‘Sustaining Earth and Its People’. In addition to the Forum discussion and individual papers on ‘Organic Agriculture and the Global Food Supply’, and ‘Ecological Agriculture’ several others deserve mention. Glenna and Jussame, presenting the similarity of interests of organic and conventional farmers for commitment to self-seeking economic interests but differences on use of GM crops, marketing and environmental values and practices, suggested validity of portraying organic agriculture as an alternative vision to industrial agriculture. In a survey to define barriers to the adoption of Integrated Pest Management (IPM) by commercial cranberry growers in the USA, Blake et al. found that highly experienced full-time growers frequently use more IPM practises and, although many growers had the perception that IPM can pose measurable economic risk, over 90% of respondents agreed that IPM can reduce pesticide levels in food and the environment, and can help preserve beneficial insects. Mburu et al. assessed the feasibility of mechanical mulching technology as a higher yielding, more intensive alternative to slash-and-burn farming in the Amazon, and found a low acceptability among farmers due to higher inputs of labor and inorganic fertilizers and the need for two cycles of profitable crops such as cassava and beans. Peters et al. present a fascinating model assessing how human patterns of meat and fat consumption dramatically influence agricultural carrying capacity and land resource use in New York State.

Ultimate success in alleviating hunger, malnutrition, poverty, and soil, environmental, land and people resource degradation globally in the technically complex world of the 21st century, however, will not come solely from intensive input or organic agriculture alone but rather a hybridization of both approaches. In addition, we have learned that sufficient food production is no guarantee that the massive numbers of poor people will be able to eat an adequate diet. Thus, access to adequate supplies of food must be viewed as a human right and, as long as poverty persists, governments must make special efforts to ensure that access. A focus on existing conventional and emerging organic systems limits the possibilities. Instead, the emphasis should be on developing cropping systems that best contribute to a set of well-defined performance parameters that ensure adequate food supply, farm family income, treats farm labor well and farm animals humanely, and protects environmental quality and natural resources. If a system meets these criteria, it should not matter if it complies with rules prescribed for organic production systems, or any other rigid set of prescriptions for crop and soil management.

A final note, in his 2006 address to the World Congress of Soil Science in Philadelphia, Jeffery Sachs, author of The End of Poverty (see book review in this issue), Director of the Earth Institute at Columbia, and special advisor to the UN Millennium Goals Task Force, identified the central role of soils and soil fertility as a key step in unlocking poverty and soil degradation in Africa6. He reaffirmed needs identified by Soil Scientists Pedro Sanchez and Cheryl Palm in the Millennium Villages Project to increase the nitrogen and phosphorus supplying power of soils through use of commercial and organic fertilizers and nitrogen fixing trees/alley crops to increase potential crop yields to farmers by three- to tenfold. Sanchez called for another ‘green’ revolution in Africa, one that would rely more on biological processes and enhance, rather than degrade, soil and environmental quality. In further discussions, and in Magdoff's article in this issue, we envision a need for a ‘triage’ approach, using nitrogen and phosphorus (purchased or donated) as needed to initially reclaim the yield-producing potential of many degraded African soils. However, a rapid transition to approaches such as Biologically Intensive Agriculture is needed to sustain productivity, reduce soil degradation, and shift reliance to mainly local resources for food production and land sustainability for present and future generations.