Influence of an intervention targeting a reduction in sugary beverage intake on the δ13C sugar intake biomarker in a predominantly obese, health-disparate sample

Controversy exists surrounding the health effects of added sugar (AS) and sugar-sweetened beverage (SSB) intakes, primarily due to a reliance on self-reported dietary intake. The purpose of the current investigation was to determine if a 6-month intervention targeting reduced SSB intake would impact δ13C AS intake biomarker values.

The δ13C sugar intake biomarker assessed using fingerstick blood samples shows promise as an objective indicator of AS and SSB intakes which could be feasibly included in community-based research trials.

In spite of a large body of evidence linking sugar-sweetened beverage (SSB) intake with adverse health outcomes, including increased risk of type 2 diabetes( 1 , Reference Basu, McKee and Galea 2 ), weight gain( 1 , Reference Malik, Pan and Willett 3 ) and obesity( 1 , Reference Basu, McKee and Galea 2 ), significant controversy exists surrounding the health effects of added sugar (AS) and SSB( 1 , Reference Bray and Popkin 4 , Reference Kahn and Sievenpiper 5 ) due primarily to a reliance on self-reported dietary intake methodologies( Reference Kahn and Sievenpiper 5 – Reference Bingham, Luben and Welch 7 ). This controversy has recently extended into the health and economic policy arena (e.g. references Reference Archer, Pavela and Lavie8–Reference Subar, Freedman and Tooze10). Public health guidelines have recommended that consumers limit AS intake and replace SSB with water( 1 ), yet critics of these guidelines cite the use of research utilizing memory-based dietary recall methods as a fatal flaw, with significant public health consequences( Reference Archer, Pavela and Lavie 8 ). The availability of an objective indicator of dietary intake, such as an AS intake biomarker, could overcome this research limitation( Reference Subar, Freedman and Tooze 10 ).

Talking Health is a randomized controlled trial which aimed to reduce SSB intake among residents of rural, health-disparate communities( Reference Zoellner, Chen and Davy 15 ). Participants were randomly assigned to either a 6-month intervention targeting a reduction in SSB intake (SIPsmartER) or a matched-contact comparison group (MoveMore). This trial represents the first randomized controlled trial directly targeting SSB intake reduction to include assessments of the δ13C biomarker, using fingerstick blood samples( Reference Hedrick, Davy and Wilburn 13 ). Our objective was to determine if group differences in biomarker δ13C values were evident over the 6-month intervention period.

Detailed design and methods for the Talking Health trial have been reported previously( Reference Zoellner, Chen and Davy 15 ). Briefly, eligible individuals (English-speaking adults ≥18 years of age, who consumed ≥200 kcal SSB/d (≥837 kJ/d) and self-reported no contraindications for physical activity) were recruited and enrolled from eight counties/cohorts in Southwest Virginia, USA, each spaced approximately 3 months apart. Within each cohort, participants were randomly assigned to SIPsmartER (n 155) or MoveMore (n 146). For randomization, equal numbers of envelopes were prepared containing the name of each study condition; participants selected a sealed envelope to determine their assigned condition. SIPsmartER targeted decreasing SSB consumption, with the primary goal of ≤8 fluid ounces (≤237 ml) per day. MoveMore targeted physical activity promotion and did not contain content related to SSB or other dietary factors. Conditions were matched in terms of contact (i.e. three small-group classes, one live teach-back call, eleven interactive voice response calls) and structure( Reference Zoellner, Chen and Davy 15 ). Participants were compensated with a gift card for completing assessments (baseline, $US 25; month 6, $US 50).

At baseline and at 6 months, participants underwent assessments of height and weight, measured in light clothing without shoes (scale model 310GS; Tanita, Tokyo, Japan). AS sugar and SSB intakes were assessed using three 24 h recalls, obtained using the five-step multiple pass method( Reference Moshfegh, Rhodes and Baer 16 ). Recalls were collected within a two-week baseline testing period. Recalls were analysed using nutritional analysis software (Nutrition Data System for Research (NDS-R 2011), University of Minnesota, Minneapolis, MN, USA). The NDS-R database primarily utilizes the US Department of Agriculture’s Nutrient Data Laboratory for its food composition data, and is supplemented by information from food manufacturers and data available in the scientific literature. Imputation procedures are applied to minimize missing values. The database is 100 % complete for AS( 17 ).

Fasting blood samples were obtained via routine fingersticks (One Touch Fine Point Lancet; Johnson & Johnson Company, New Brunswick, NJ, USA). Blood samples were blotted on to sterilized binder-free glass microfibre filters (Whatman, type GF/D, 2·5 cm diameter; Whatman, Inc., Piscataway, NJ, USA), air-dried and then analysed for δ13C value using natural abundance stable isotope MS, as per our previous work( Reference Hedrick, Davy and Wilburn 13 , Reference Davy, Jahren and Hedrick 14 ). Samples were analysed in triplicate; the analytical error associated with each measurement in the current investigation was 0·039 ‰. Stable isotope values are reported using standard δ-notation in units of ‘per mil’ (‰) relative to international standards (Vienna Pee Dee Belemnite (VPDB)). The unit ‘per mil’ is standard within stable isotope reporting and refers to the number of units out of 1000; similar to how ‘per cent’ refers to the number of units out of 100. Human blood samples have lower δ13C values than the VPDB standard, therefore the δ13C values presented here are less than 0. A δ13C value of human blood that is closer to 0, representing a higher 13C:12C in the diet, corresponds to a higher AS or SSB intake( Reference Jahren, Bostic and Davy 11 , Reference Davy, Jahren and Hedrick 14 , Reference Jahren, Saudek and Yeung 18 ). Alanine was used as an internal laboratory standard for carbon. A more detailed description of this biomarker technique, which includes the δ13C values of several dietary sources of AS and SSB, as well as foods with ‘low’ δ13C values which may contribute to total sugar intake (e.g. fruit), has been previously published( Reference Jahren, Saudek and Yeung 18 ). 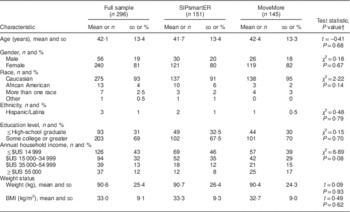 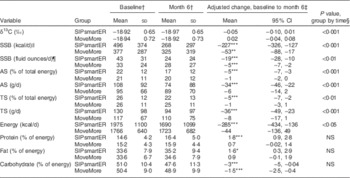 † Means and standard deviations are not adjusted for covariates.

The Institute of Medicine and others have highlighted the need for novel methods to objectively assess dietary intake, including biomarkers of food and nutrient intakes( Reference Subar, Freedman and Tooze 10 , 19 ). Common limitations of existing biomarker techniques include cost, participant burden and degree of invasiveness( Reference Thompson, Subar and Loria 20 ). The current investigation describes results from the first randomized controlled trial evaluating an SSB intake reduction intervention to include assessment of the δ13C sugar intake biomarker with particular application to SSB. Group differences in biomarker δ13C values and in self-reported AS and SSB intakes were detected over the intervention period, and in weight and BMI. Importantly, this biomarker was evaluated using minimally invasive fingerstick blood samples obtained in a field research setting. These findings suggest that the δ13C value of fingerstick blood shows promise as a biomarker of AS – and by extension – SSB intake, which could be feasibly included in large-scale, community-based research trials.

Mean δ13C value in this sample was higher than that reported in a university community( Reference Davy, Jahren and Hedrick 14 ), which is expected given the high SSB consumption reported by participants (~400–500 kcal/d; 1674–2092 kJ/d). Although the significant correlations between biomarker values and self-reported SSB intake at baseline and at month 6 were considered modest (i.e. r~0·3)( Reference Dancey and Reidy 21 ), these correlations may underestimate biomarker validity due to dietary intake under-reporting( Reference Willett and Lenart 22 ), which is a particular problem when reporting intake of socially undesirable foods such as SSB( Reference Subar, Freedman and Tooze 10 , Reference Johnson, Yon and Hankin 23 ).

Strengths of the current investigation include a large sample size, the low degree of invasiveness for sample collection and the investigation of changes in biomarker values in response to an intervention targeting a reduction in SSB consumption. Limitations include the use of self-reported AS and SSB intakes as the method for biomarker comparison and the inability of the δ13C biomarker to detect some forms of AS such as beet sugar, honey and maple syrups. These represent minor contributors of AS to the US diet (i.e. 22 %) compared with corn- and cane-derived sweeteners (i.e. 78 %)( Reference Jahren, Bostic and Davy 11 ); however, we did not assess these forms of AS in this sample.

The availability of an objective indicator of AS and SSB intake could overcome a commonly cited methodological limitation of research investigating the health effects of AS and SSB consumption( Reference Kahn and Sievenpiper 5 – Reference Bingham, Luben and Welch 7 , Reference Subar, Freedman and Tooze 10 ). Additional research is warranted to investigate the validity of the δ13C sugar intake biomarker in children and adolescents, who consume high amounts of AS, and in controlled feeding trials.

Financial support: This work was supported by the National Institutes of Heath (Principal Investigator J.M.Z., grant number 1R01CA154364). The National Institutes of Heath had no role in the design, analysis or writing of this article. Conflict of interest: The authors declare no conflicts of interest. Authorship: All authors formulated the research question and contributed to the study design. V.E.H. and J.M.Z. collected the data. A.H.J. performed the laboratory analyses. B.M.D., W.Y. and J.M.Z. conducted the data analysis. All authors contributed to manuscript drafting/revisions. Ethics of human subject participation: This study was conducted according to the guidelines laid down in the Declaration of Helsinki and all procedures involving human subjects were approved by the Virginia Tech Institutional Review Board. Written informed consent was obtained from all subjects.

Influence of an intervention targeting a reduction in sugary beverage intake on the δ13C sugar intake biomarker in a predominantly obese, health-disparate sample
×

Influence of an intervention targeting a reduction in sugary beverage intake on the δ13C sugar intake biomarker in a predominantly obese, health-disparate sample
×

Influence of an intervention targeting a reduction in sugary beverage intake on the δ13C sugar intake biomarker in a predominantly obese, health-disparate sample
×
×