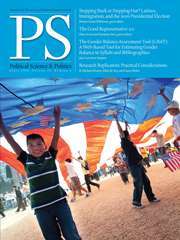 Symposium: Stepping Back or Stepping Out? Latinos, Immigration, and the 2016 Presidential Election