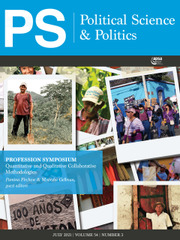 Annotation for Transparent Inquiry (ATI): Transparency in Practice in Qualitative and Multi-Method Research