Astrochemistry VII: Through the Cosmos from Galaxies to Planets 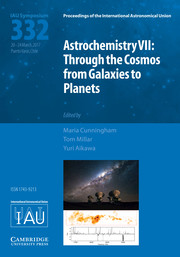