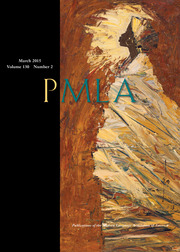 Reframing Postcolonial and Global Studies in the Longer Durée