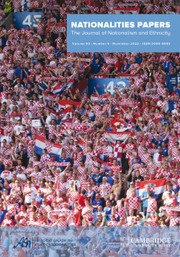 Photo taken by Dario Brentin: Croatian national football team fans singing the national anthem at the 2016 UEFA European Championships in France. The photo was taken at the second group stage game against the Czech Republic in St. Etienne, and explores the idea of Croatia’s national football team as the country’s ‘most holy’ institution, a narrative perpetuated ‘from above’ and ‘from below’ over the last thirty years. It illustrates the central nexus of my research, the intricate relationship between sport, identity, and the nation. For post-Yugoslav Croatia, the fi eld of sport represents a unique source of social knowledge, contributing signifi cantly to the formation, establishment, and conservation of the newly emerging national identity after the dissolution of socialist Yugoslavia. To this day it remains a highly politicized form of national expression, through which categories such as nation, identity, or culture are discussed, contested, and established.