Special Issue on Conceptualizing and Operationalizing Identity, Race, Ethnicity, and Nationality by Law 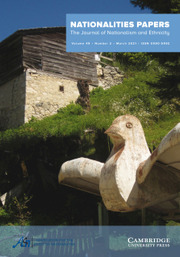