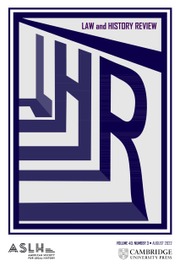 Forum: Holly Brewer's “Creating a Common Law of Slavery for England and Its Empire”