The Medicalization of Poverty; Perspectives of Alzheimer's Disease: Ethical, Legal, and Social Issues 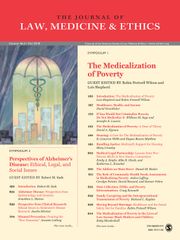