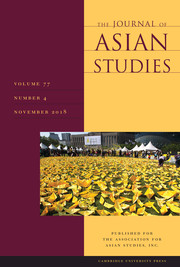 JAS at AAS: The Market, the Media, and the State in Asia II